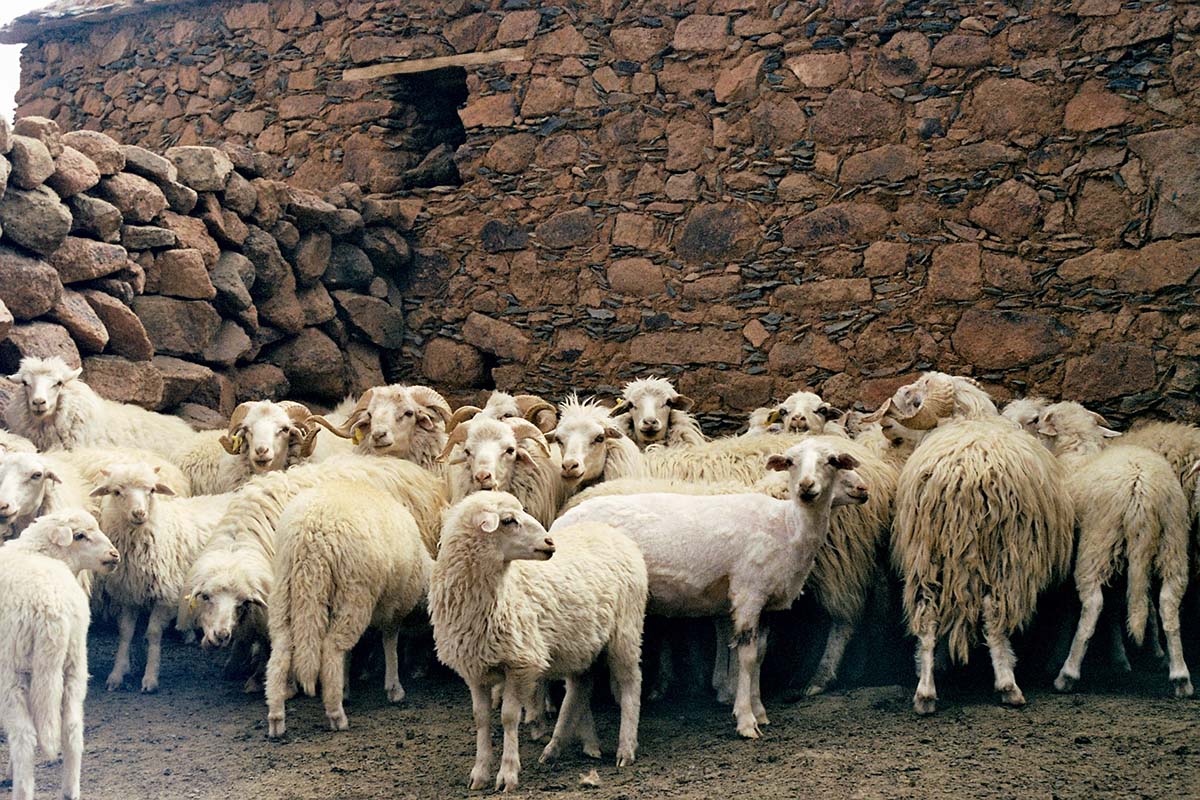 The valorisation of local wool in the Siroua massif

We discovered the tribal weavings of the Anti-Atlas in university libraries. Captivated by their aesthetics, we wanted to see the Haik and Adghar with our own eyes; woollen veils, dyed with henna or other plant dyes, worn by women at the time of their wedding...

In April 2018 we visited the birthplace of this craft, in the remote villages of the Moroccan Anti-Atlas. In a landlocked village of the Feija tribe, we discovered that women still weave these pieces, passing their knowledge from mother to daughter at the time of marriage. In this place where time seems to have stopped, they transform the sheep's fleece into the fine garments.‍

After many months of work on site, experimentation and exchanges, we established a mutual trust with the women weavers of the village. The origin of this principal raw material, the fleece, then became our focus. The craftswomen buy the fleece in the souk, just like the plant dyes. Our next intention was to study the traceability and quality of these materials.

Weaving through the narrow streets of Marrakech's medina and talking to friendly merchants in the souks, we realised that most of the rugs are made with industrial wool, bought at the weavers local souks. The wholesale merchants in Marrakech buy from the Moroccan spinning mills in Salé, Chefchaouen or abroad, with increasing amounts of the wool yarn being imported from Australia, New Zealand and Bolivia due to a better quality/price ratio; A surprising discovery, given that sheep breeding is a predominant activity in all the agro-systems of Morocco.

It was in Marrakech that we met Annie Lavaux, coordinator of the association Maroc Inédit, involved in the promotion of solidarity ecotourism in Morocco but also within the Network of Agroecological Initiatives. Annie has initiated many training courses for craftswomen on the theme of the promotion and transmission of women's crafts in Siroua, her anchorage territory. She told us about the Siroua sheep and Foum Zguid's henna.

In the Siroua mountains, and on the plateaus of the Anti-Atlas between the Toubkal range and the desert, a local breed of sheep is known to provide the wool for the carpets of the Aït Ouaouzguit tribes. Known to specialists in tribal weaving, the Siroua sheep was not included in the list of local Moroccan breeds until 2014, on the initiative of a breeder in the Aït Amran valley, close to Taliouine. It is, however, the main woolly breed in Morocco.

This rustic breed of short-legged sheep are well adapted to the rocky mountain paths of the region which range up to altitudes of 3000 meters. This sheep is not often used for meat due to its reduced weight compared to other recently introduced breeds. Its meat, however, is tasty and fragrant thanks to the aromatic plants, such as mugwort and thyme, on which it grazes. It is more frugal than other breeds, grazing carefully, without uprooting the plants.‍

The Siroua’s silky fleece is intense black, or all white, with particularly long fibres growing up to 30 cm in length, and breed forms an integral part of the socio-economic heritage of the massif. Traditional natural environment management strategies are still in place, and the high altitude pastures between 2000 and 2800 meters are still managed collectively by the communities in order to preserve plant resources year after year. These pastures, or Agdals, are open to the herds after the meadows have bloomed, from the moment the plants have released their seeds, until the first snows. Thanks to numerous springs, these vast green plateaus are an oasis in an otherwise dry, mineral landscape. ‍

The stone sheepfold villages, known as Azibs, welcome the return of the herders and their families at the end of the school year. These villages grow crops on terraces irrigated through a network of seguias (canals) from the captured springs, providing vegetables, cereals and precious saffron.

Support to farmers to improve wool shearing and sorting practices

At the end of April 2019, accompanied by 3 experts Annie Lauvaux, Simon Nadal and Elisa Barbone, we left for a week on the roads of the Anti-Atlas to meet breeders and shepherds. We travelled through the high plateaus of the Siroua massif, less than 100 kilometres from the villages of the weavers we work with.

Simon is a professional shearer and member of The Atelier; a European wool, and textile association for liaison, innovation, exchange and research. The Atelier’s members include breeders, shearers, spinners, weavers, knitters, small industrialists, craftsmen, artists and researchers in the field of wool. Not resigning themselves to economic fate, and driven by a  passion for this material, they have rejuvenated the wool industry and constitute a network that has gradually expanded across Europe. Elisa is an expert in collecting and sorting wool, they both trained in New Zealand.

We wished to anchor our common research around the following themes: organization of breeders, preservation of the Siroua breed and valorisation of wool. The objectives: to guarantee an income to the breeders by helping them adapt to the quality and efficiency requirements of the modern wool industry in a way which respects local biodiversity, and preserves traditional practices. For Memòri, it was also a question of finding the best flocks to supply quality fleeces to the women weavers.

We contacted the ANOC programme (National Association of Sheep and Goats), whose objective is the genetic improvement of sheep and goat breeds in Morocco. Through them, we were able to go to shearing sites of ANOC breeders to observe, evaluate and exchange on their practices. These training excursions, led by Simon and Elisa, were independently co-financed by the two associations Maroc Inédit and Memòri Lab.‍

Shearing and sorting are two crucial steps for the quality of the fleece, which will later be spun into thread. The fleeces should be as free as possible from plants and free of all dirty or brittle parts (back, fleece edges, hindquarters, legs). The cut must be made in such a way as to preserve the full length of the wool. The fleece, in one piece, must then be carefully rolled before being bagged. ‍

Traditionally the shearing is done by force, using iron scissors made by local blacksmiths, in enclosures either in the villages or in the azibs, or sheepfolds. Electric shearing has only recently been introduced by the ANOC program, and the shearers we observed had not yet adapted to their modern tools: Poor control of the shears led to the fleece being cut too close to the skin, leaving the sheep with little protection against the extreme heat of the sun during the day and very cold nighttime temperatures. Most shearing sites also lack electricity, meaning that a generator has to be brought in, which is not recommended above 1000 m.

After observing several herds and grazing sites, we approached Hassan and his fellow breeders from the Aït Ouargarda tribe, with an offer of a working collaboration. These high-altitude herds, located in the azib of Argh, have been selected by the ANOC for the incredibly high quality, and homogenous wool their flocks produce.‍

With these herders, we discussed how to valorise the know-how of the force shearing technique. The careful, hand-shearing method leaves a few centimetres of fleece on the animal, enough to protect it from the extreme climate. Moreover, this shearing process is less stressful for the animal’s skin, encouraging the wool to grow.

‍The second step will be to work with the shearers on their technique, using practices such as the restraint technique (Bowen method, New Zealand) which increase wool yields and cause less pain to the sheep. We will also work on the sorting process, building tables to separate the wool by quality, and provide bags adapted for storage and handling, to preserve the wool after shearing. These measures will help guarantee the best quality of the wool, and provide the herders with a better income. 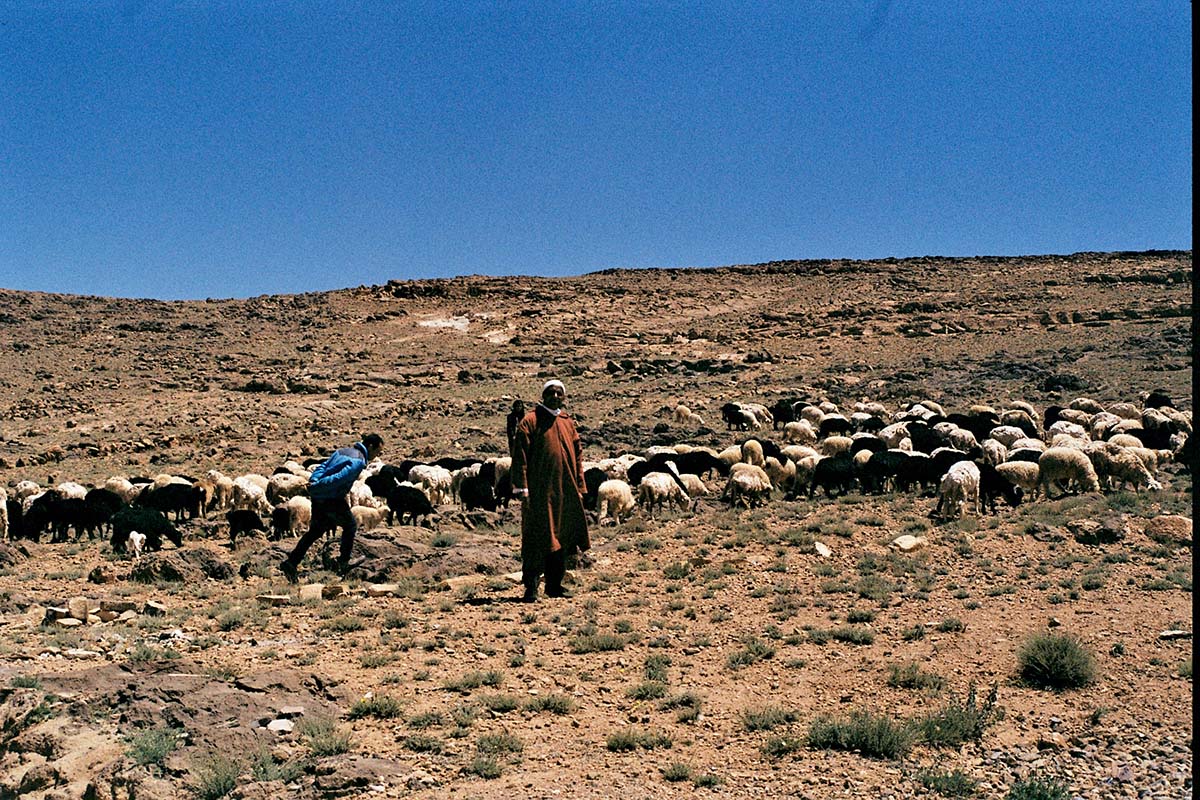 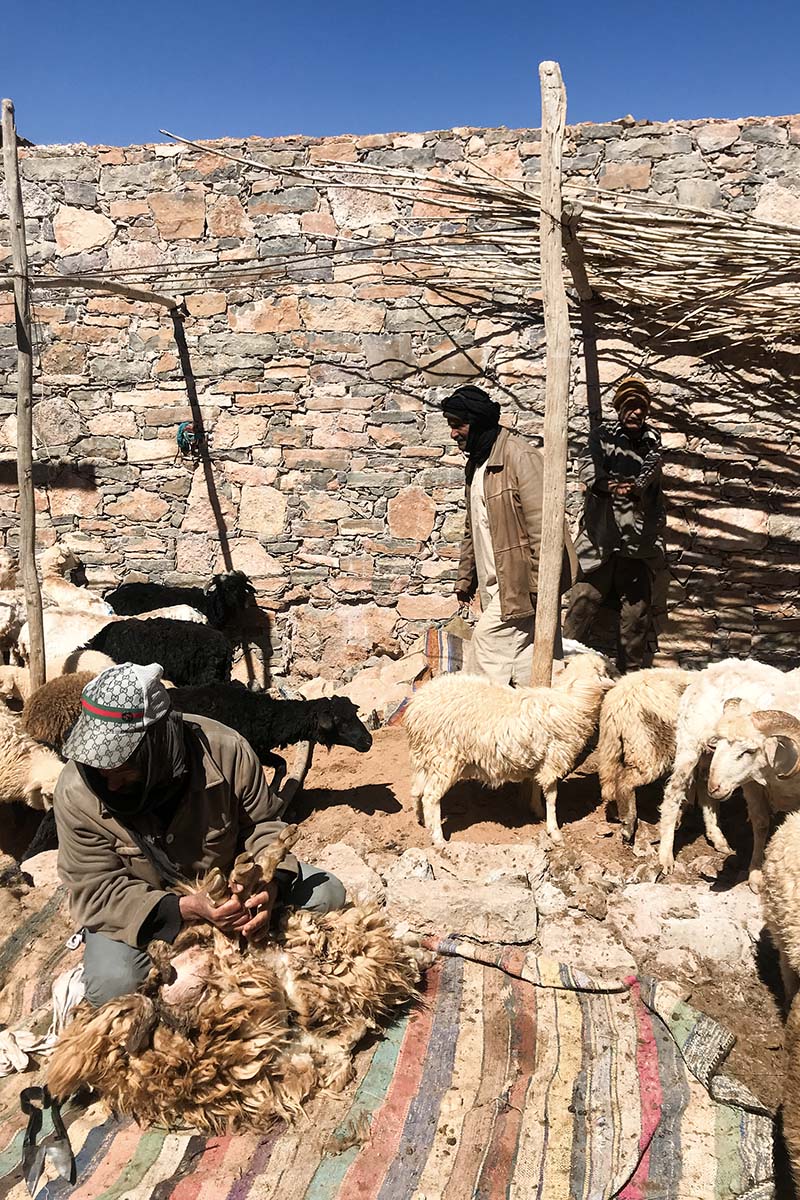 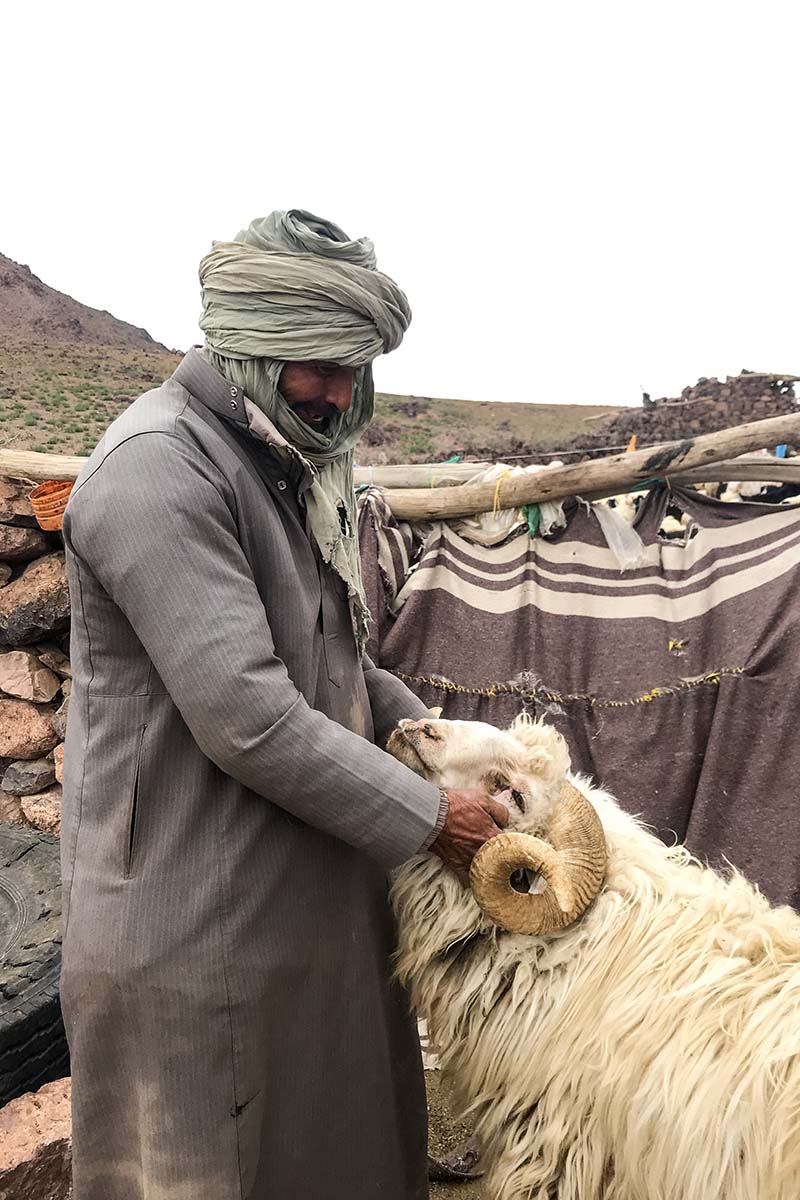 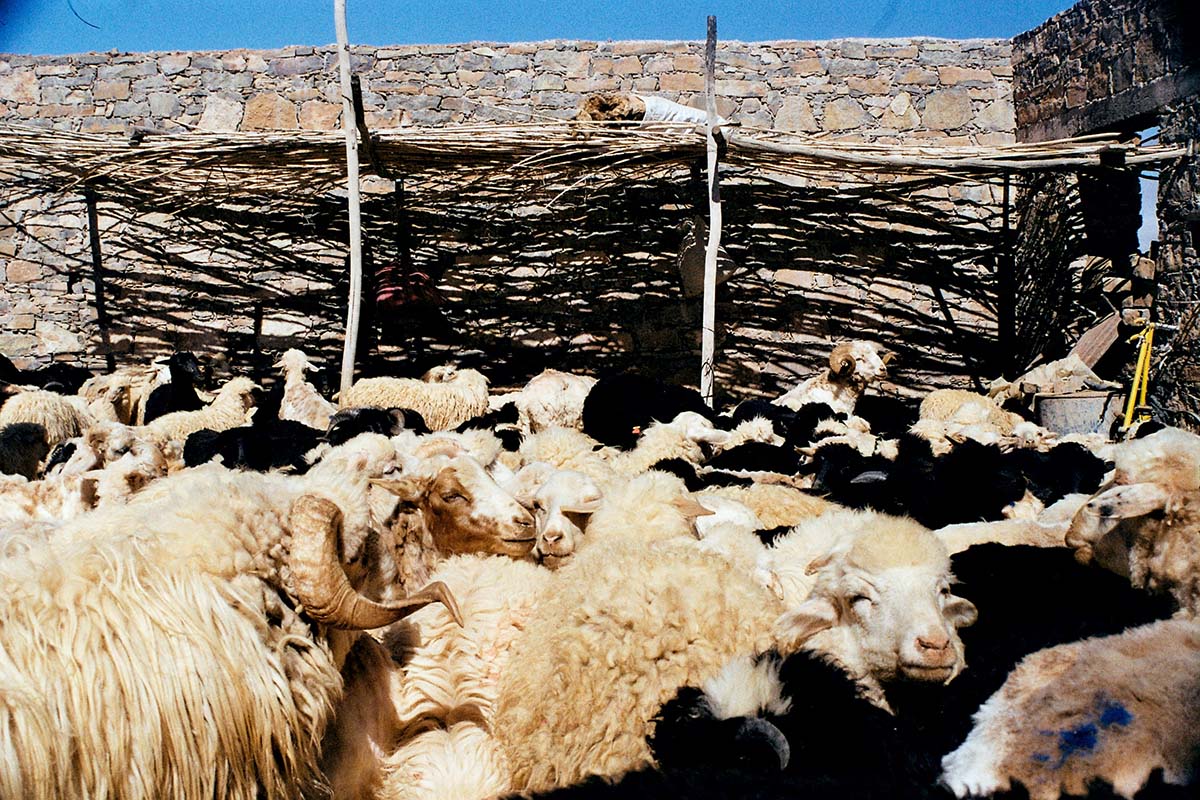 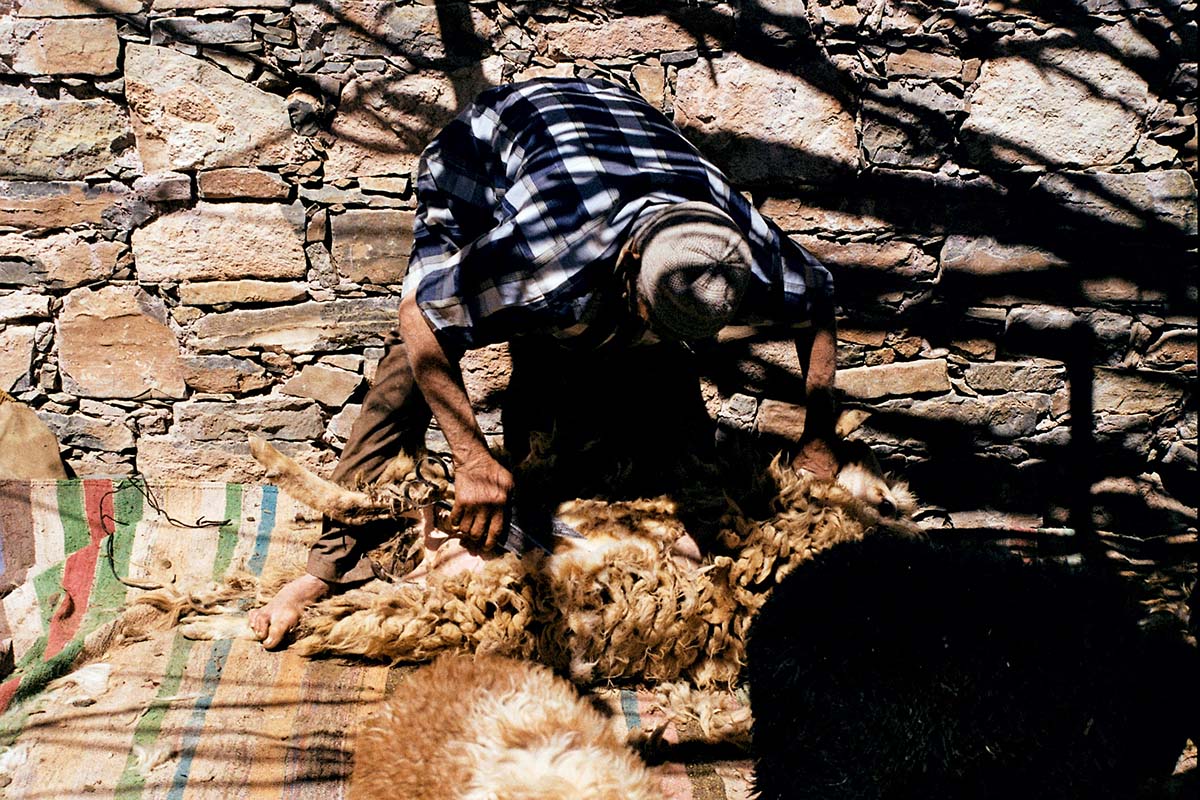 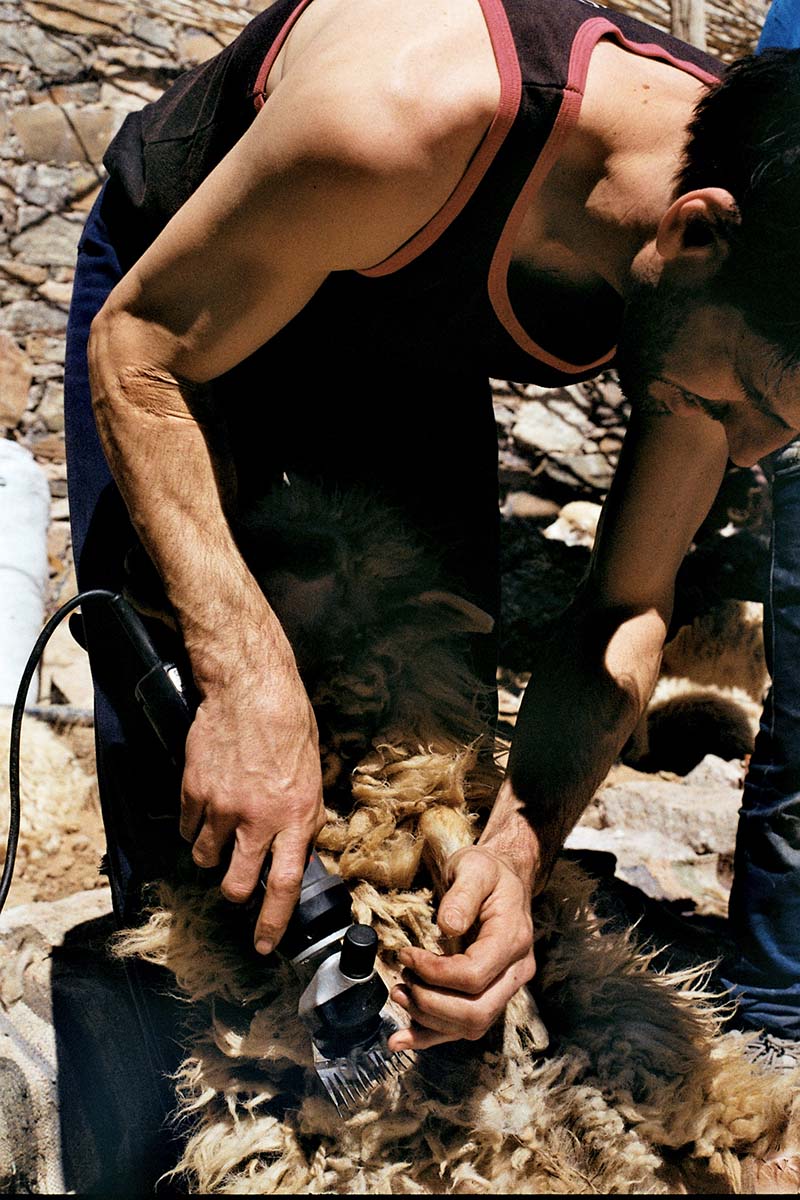 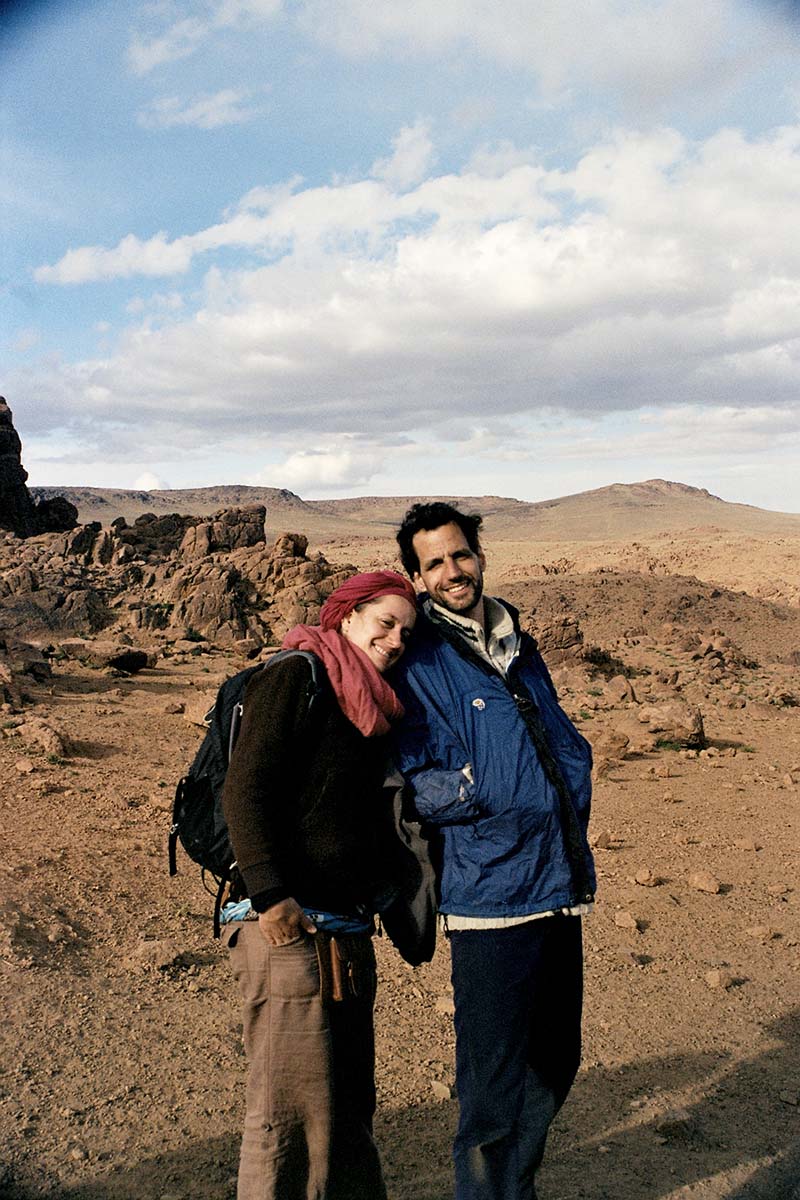 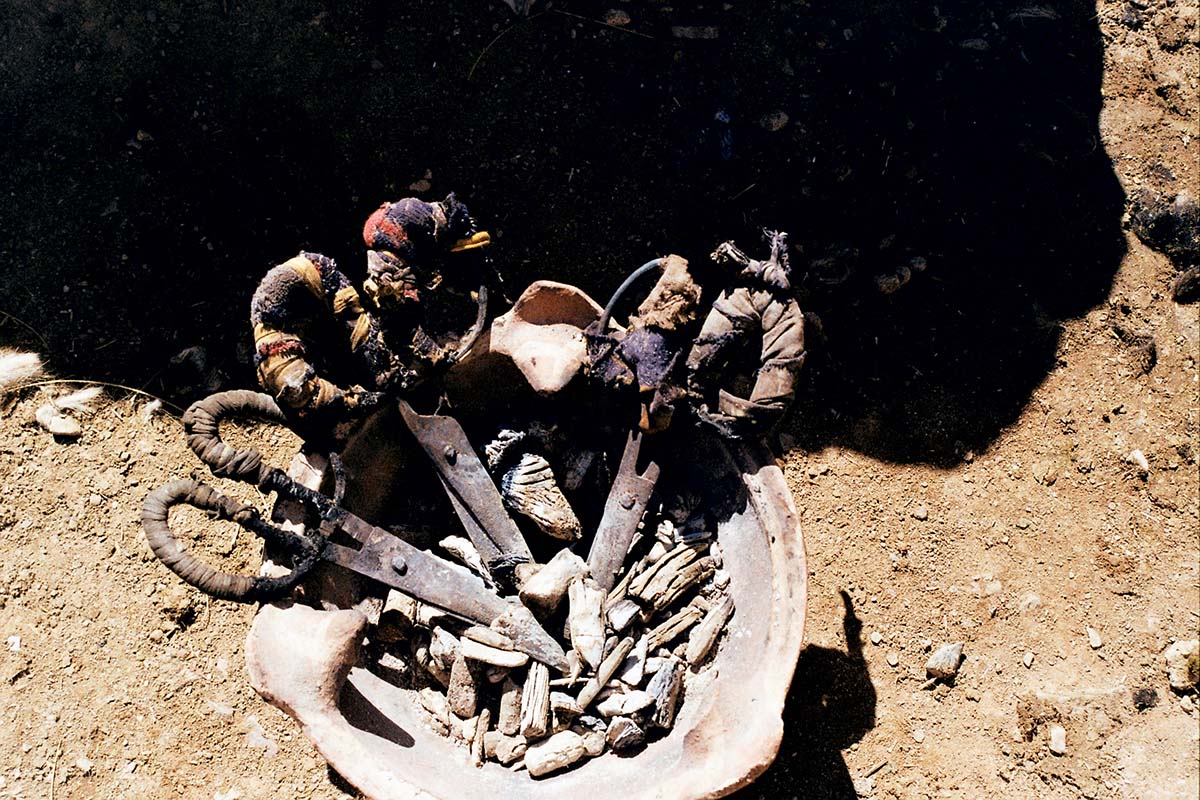 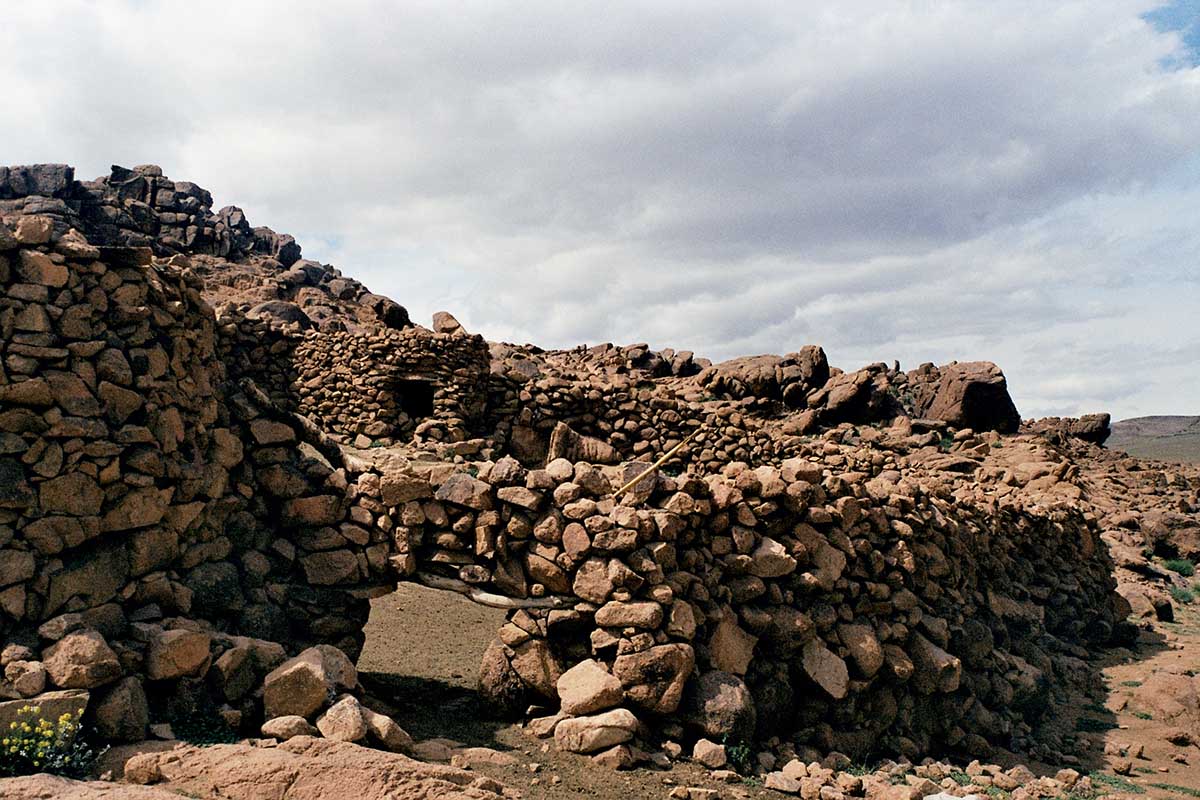 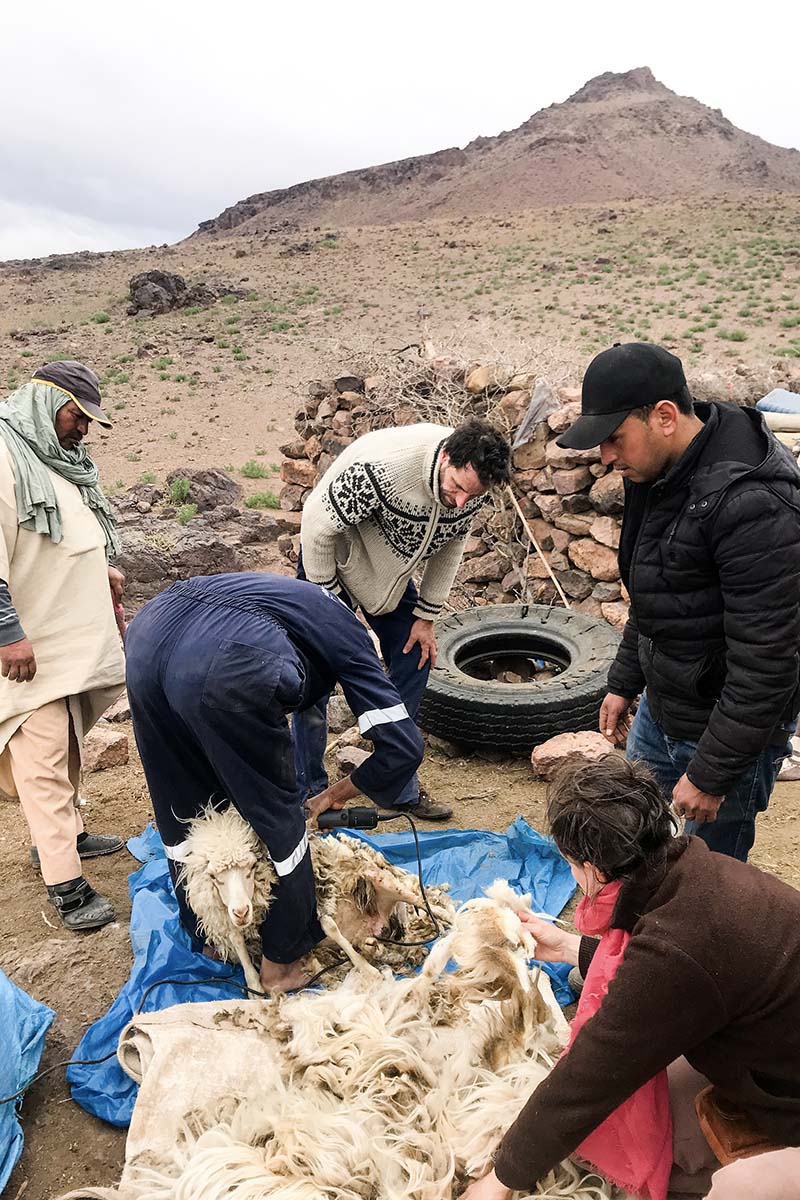 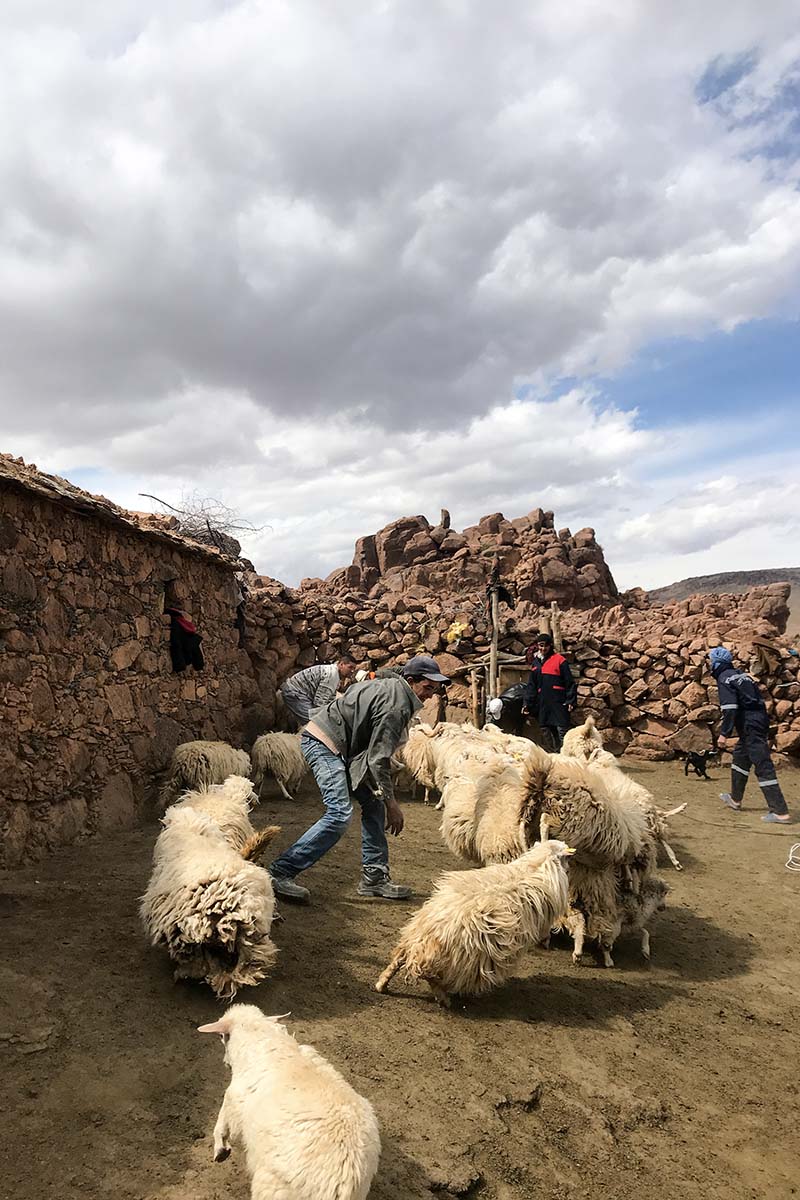 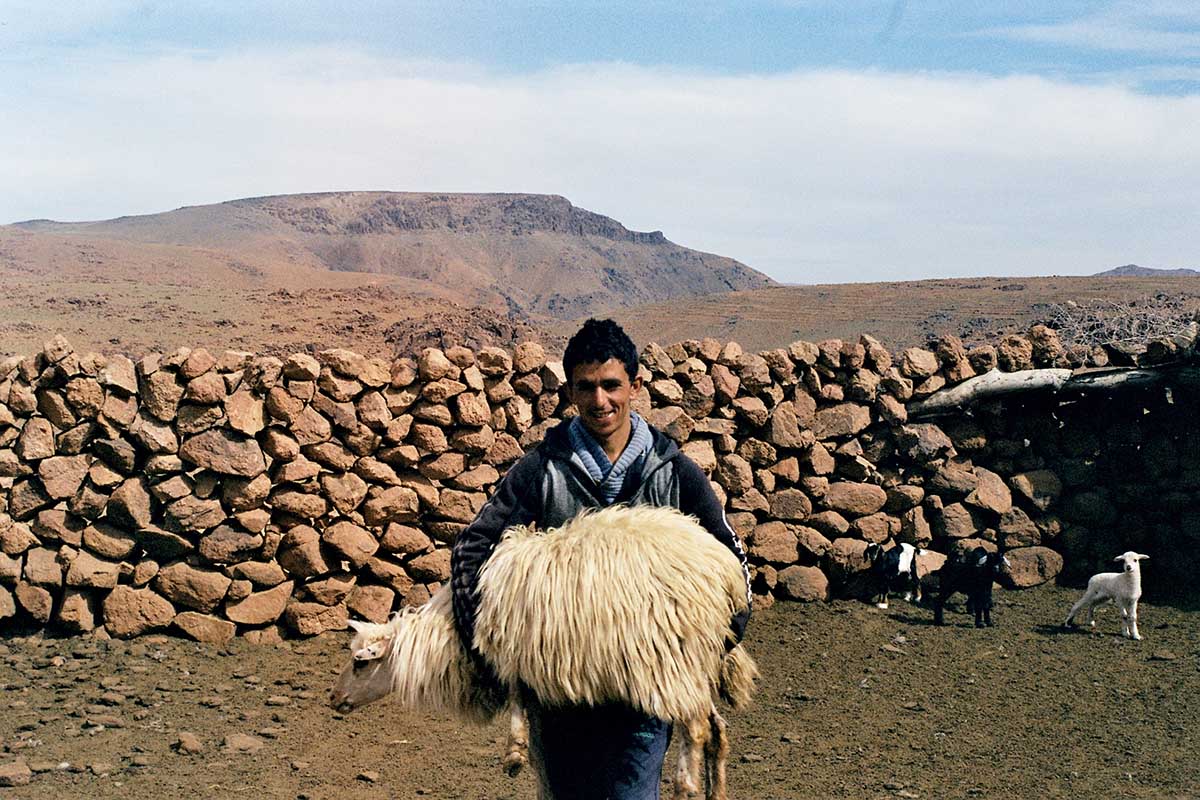 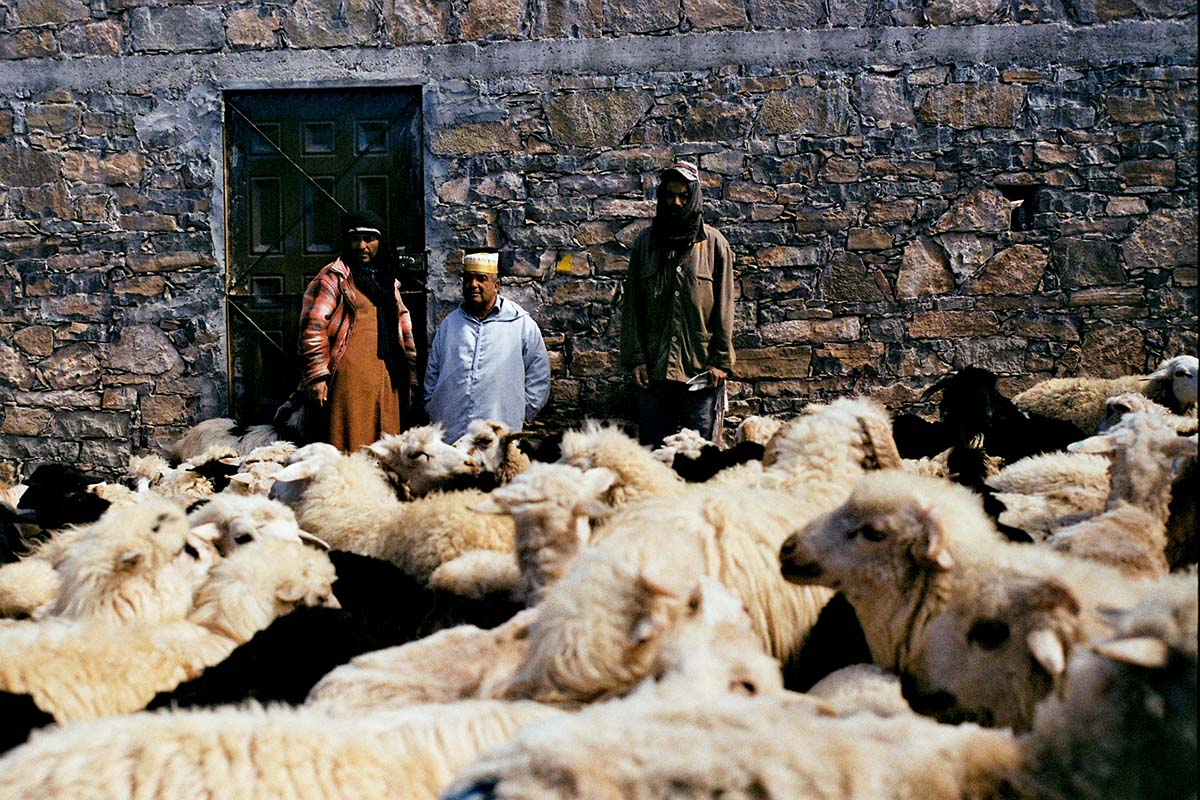 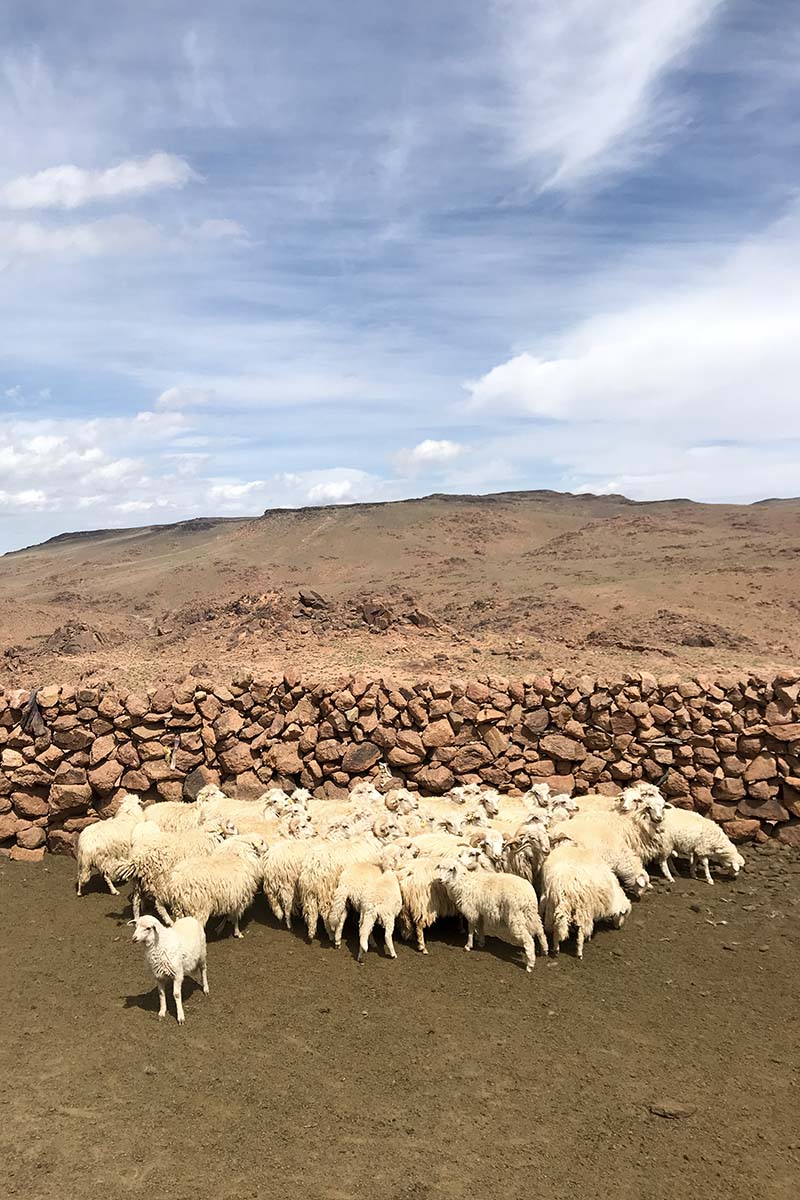 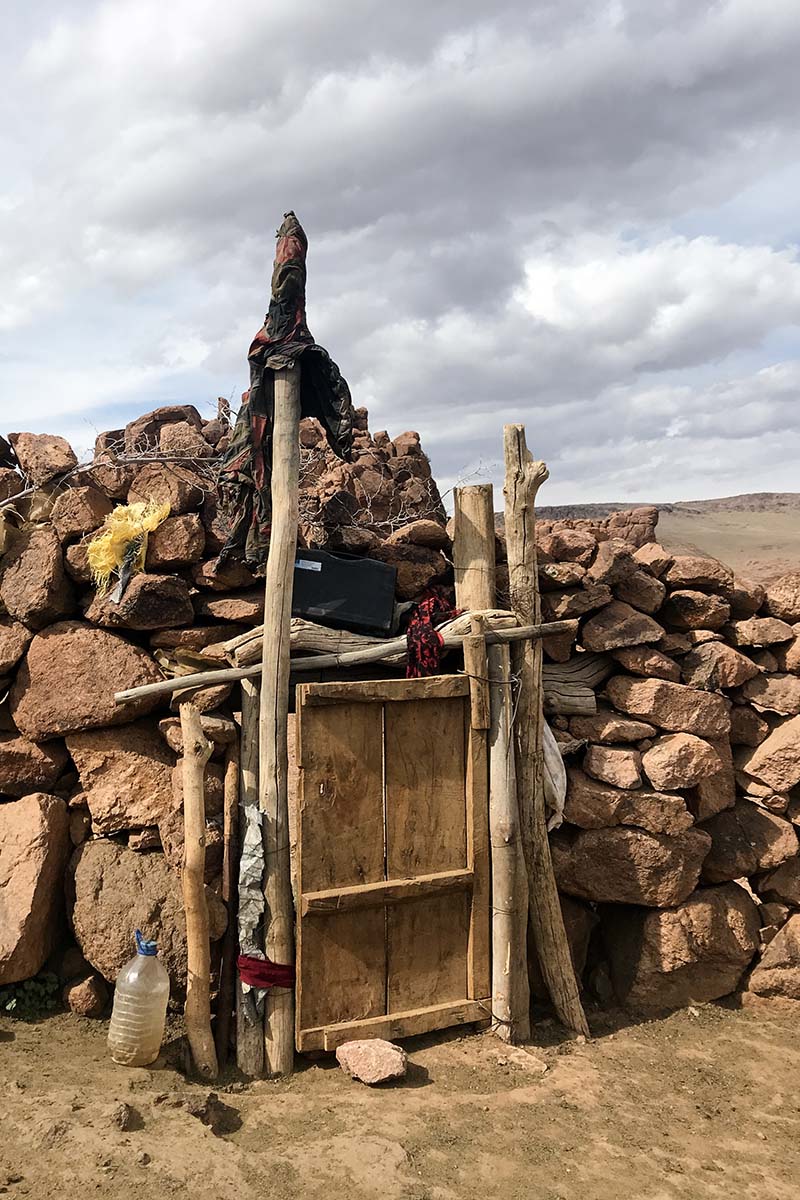