The modeled pottery from the Moroccan Rif mountain

A rural and utilitarian pottery deeply rooted in its territory

The potters of northern Morocco perpetuate the ancient art of modeled pottery, which first appeared around 6,000 BC. The techniques and patterns used today are very close to those of their origins. This ancestral know-how, which has disappeared around the Mediterranean, still lives in the pre-Rif. Today, these potters are the guardians of this ancient art.

Each traditional piece bears the marks belonging to each tribe. With shapes, decorations and reinterpretations, each piece is unique and echoes the singular grace of its original creator. In the beginning, these potters were from the Berber tribes,  and over thousands of years of oral tradition, the meanings of these symbols and decorations have sadly been lost. The pre-Rif is now largely an Arabic-speaking area, but on the Mediterranean coast, we speak the Tarifit, a Berber language. We have written the names of the pieces that follow in Darija, the Moroccan Arabic dialect. 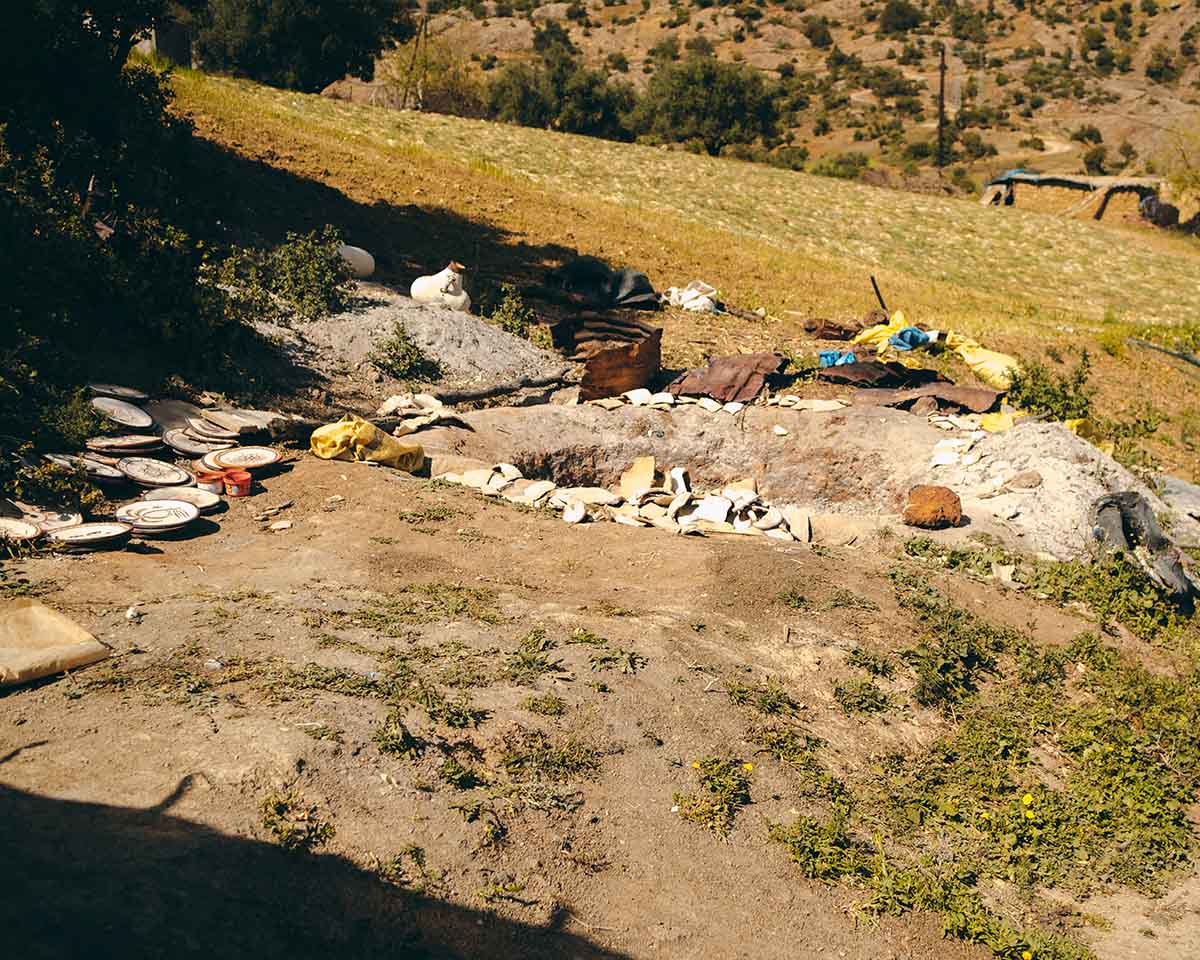 Elsewhere in Morocco, pottery is masculine and urban, using the wheel. In the pre-Rif, the domestic pottery is specific to this mountainous region, and solely crafted by women. The practice of these primitive techniques is time consuming, requiring patience and long periods of drying. The modeling and firing techniques are very rudimentary. Depending on the tribe, the potter prepares an open fire or a dug hole - a pit oven -, and covers it with wood and shavings. It requires a slow combustion below 1000 degrees Celsius. At each step of the process, the materials used are natural and come from the potter’s surroundings; the clay and grog dug from the earth, mineral pigments for painting . The primitive firing technique leads to unpredictable and unexpectedly beautiful results, including the appearance of fire marks on certain parts.
‍
The utilitarian pieces the potters create meet the needs of the rural way of life. They are  either used in the household of the potter, sold during the weekly market, or can  be traded with neighbors for foods such as olive oil or barley.
‍
Thus, the uses of modeled pottery can be many. It is used for the preservation and storage of food, the transport and conservation of liquids, or even for the preparation and consumption of dishes. For each type of object, the shape or the decorations can vary according to the tribe of belonging. 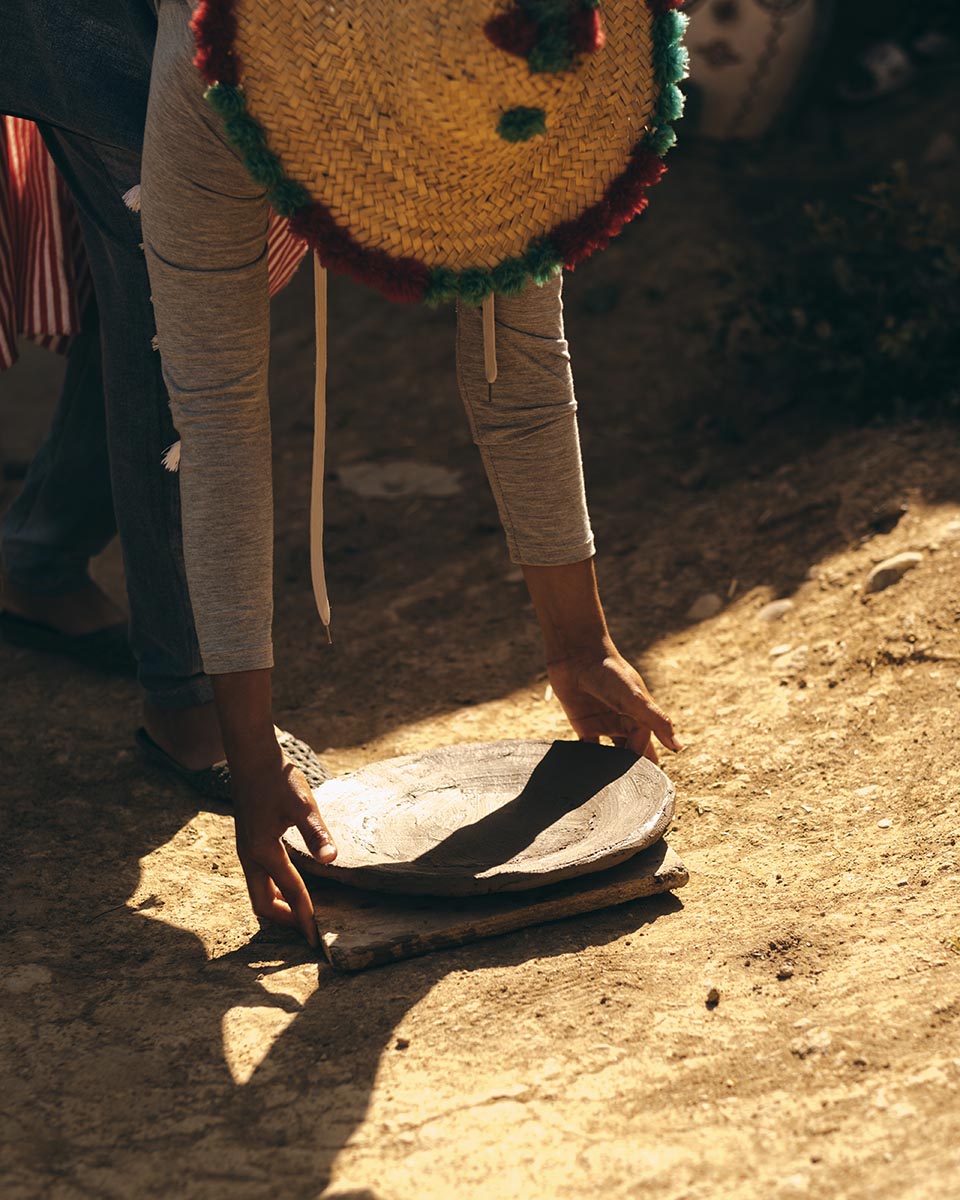 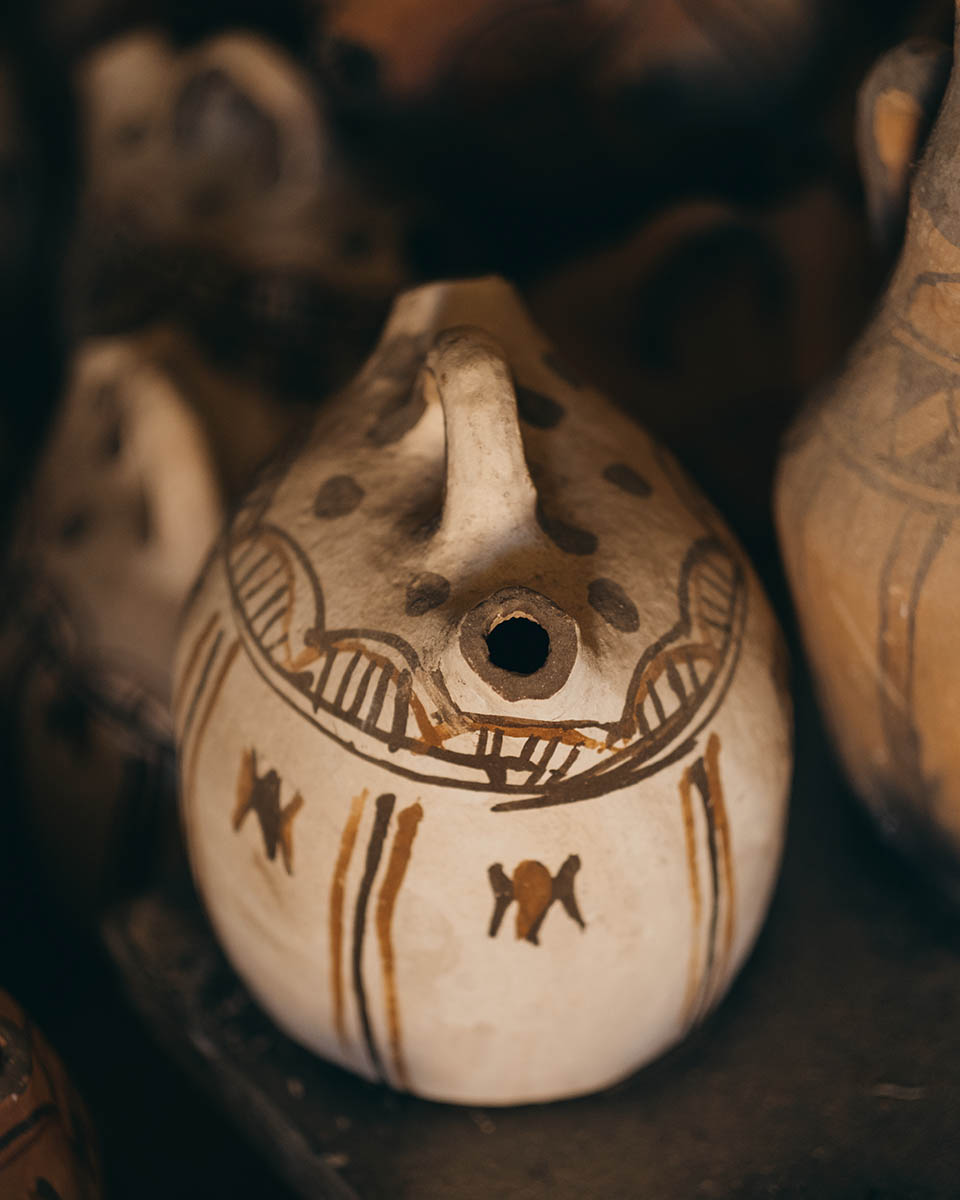 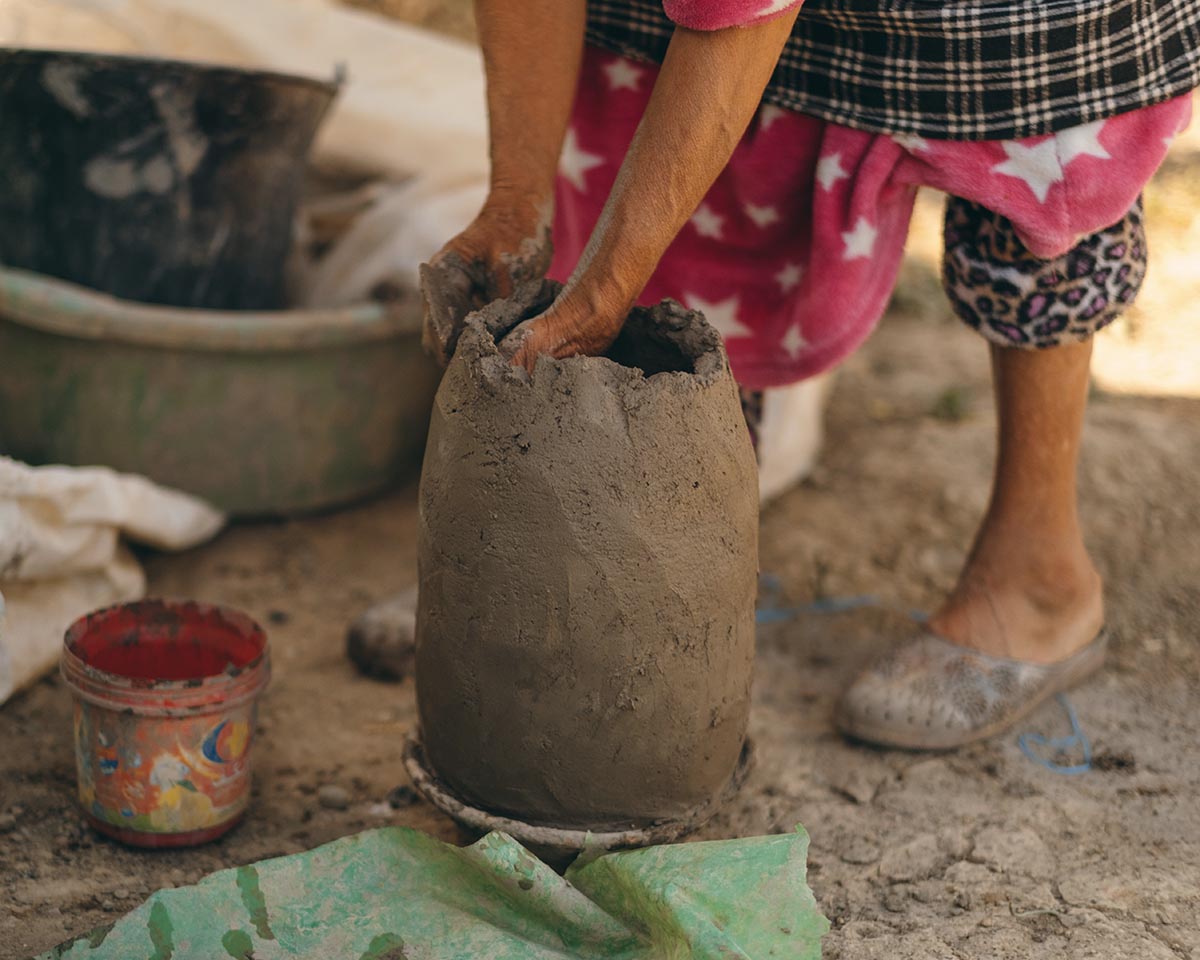 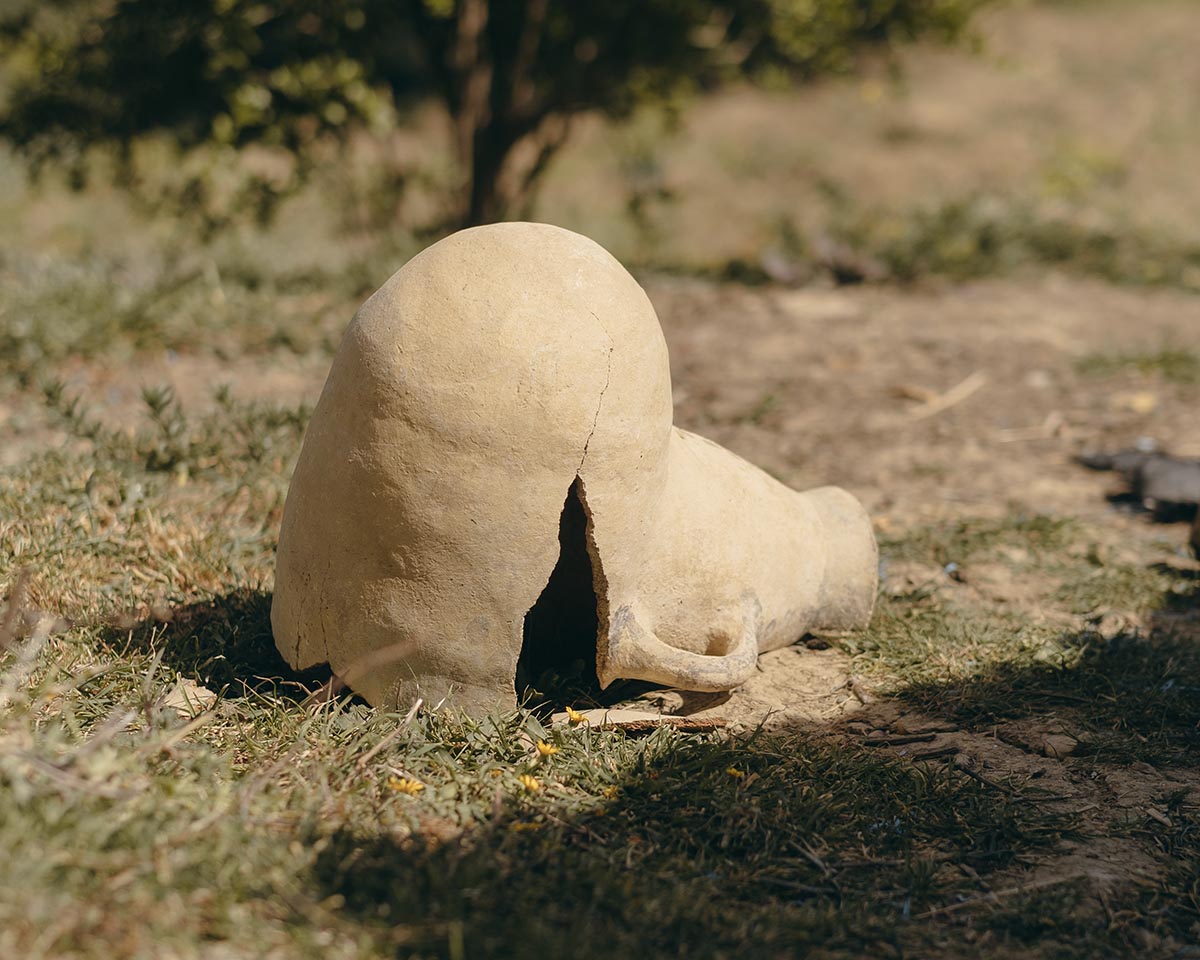 Among the objects still in use, there is the jabia, a large pot used to keep water cool thanks to the evaporation allowed through its porous walls. The jug, berrada el berd, is used to serve water in glasses, kes, after using the jabia. The abukal piece is used in Rif cooking to store dry foods such as sugar, honey, or spices.
‍
The churn, afquir or lefquir, is a very old piece used to transform the cream of milk into butter. It is still used by every family in the region. The woman shakes the milk in the jar placed on the ground, or hung on a tree, held by a rope.
The bee smoker, nafaj, keeps the bees away for better access to the hive, guerrulla, and the honey inside. All these traditional pieces are still used sporadically by certain families.
‍
Barbecue for cooking food was common in all tribes until very recently, whether they were potter families or not. The canun, or mechmar barbecue, is always very popular during the major Eid el kebir festivals.
‍
The couscous maker, keskes, is used for steaming. Materials such as aluminum or steel have replaced earthenware in rural Rifan cuisine. But for certain dishes such as tagines, women still use keskes made of clay. 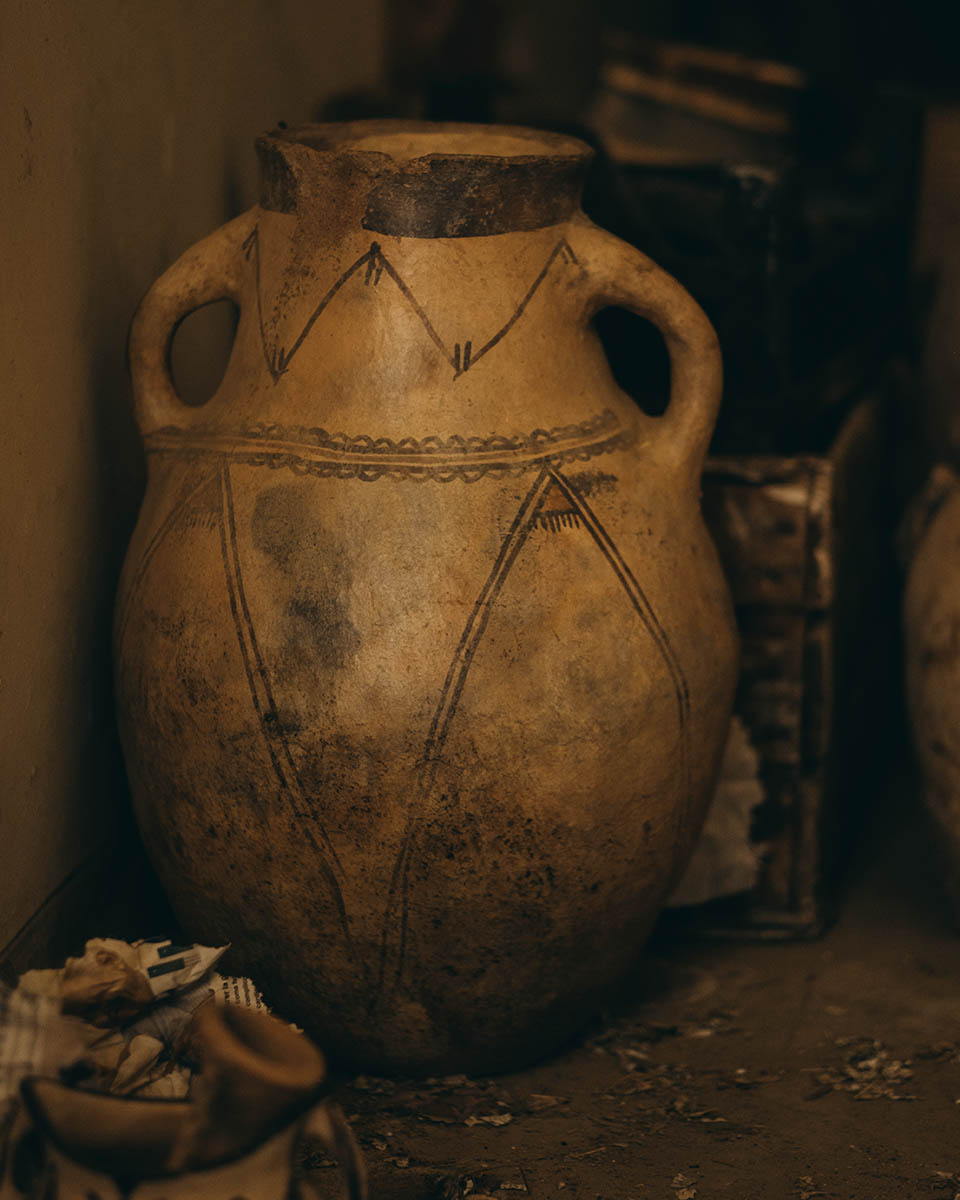 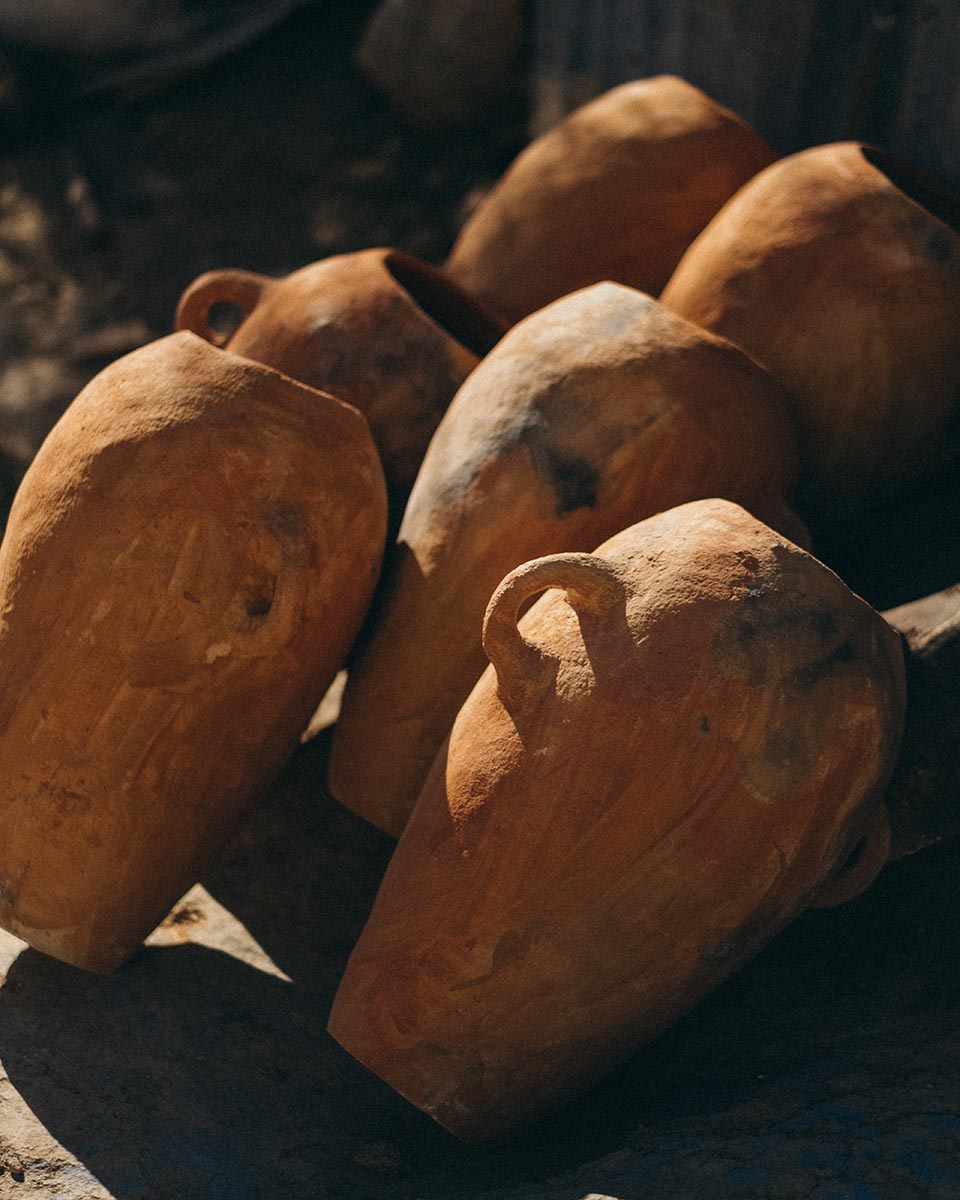 Among the many household chores that the Rif woman must perform every day, there is the making of bread. The sahfa dish has the function of kneading the bread, or preparing the typica pancakes, msemen or baghrir. The bread is baked in an earthen bread oven, conical in shape and very large, built outside the house. The woman potter, a true expert, takes part in the construction of the bread oven for each family of her tribe.
‍
Originally guembura pottery transported water from the spring to the home. People carried it on the shoulder, hung by a rope. Today they are practically no longer used in this way.
‍
Thus this tradition, which continues by the modeling of churns, barbecue, oil lamps, and milk jugs, .... is threatened with extinction. In the Rif mountains, there were whole villages of potters a decade ago. Over recent years, the number of potters in the region has collapsed. The Women become too old or get tired of this difficult and skilful work, which offers very few commercial outlets.
‍
Recently, modernity has infiltrated the lifestyle of this region. Heavy and fragile utility pottery has largely been replaced by aluminum and then plastic objects. Most girls now, in school, are not interested in working with clay. 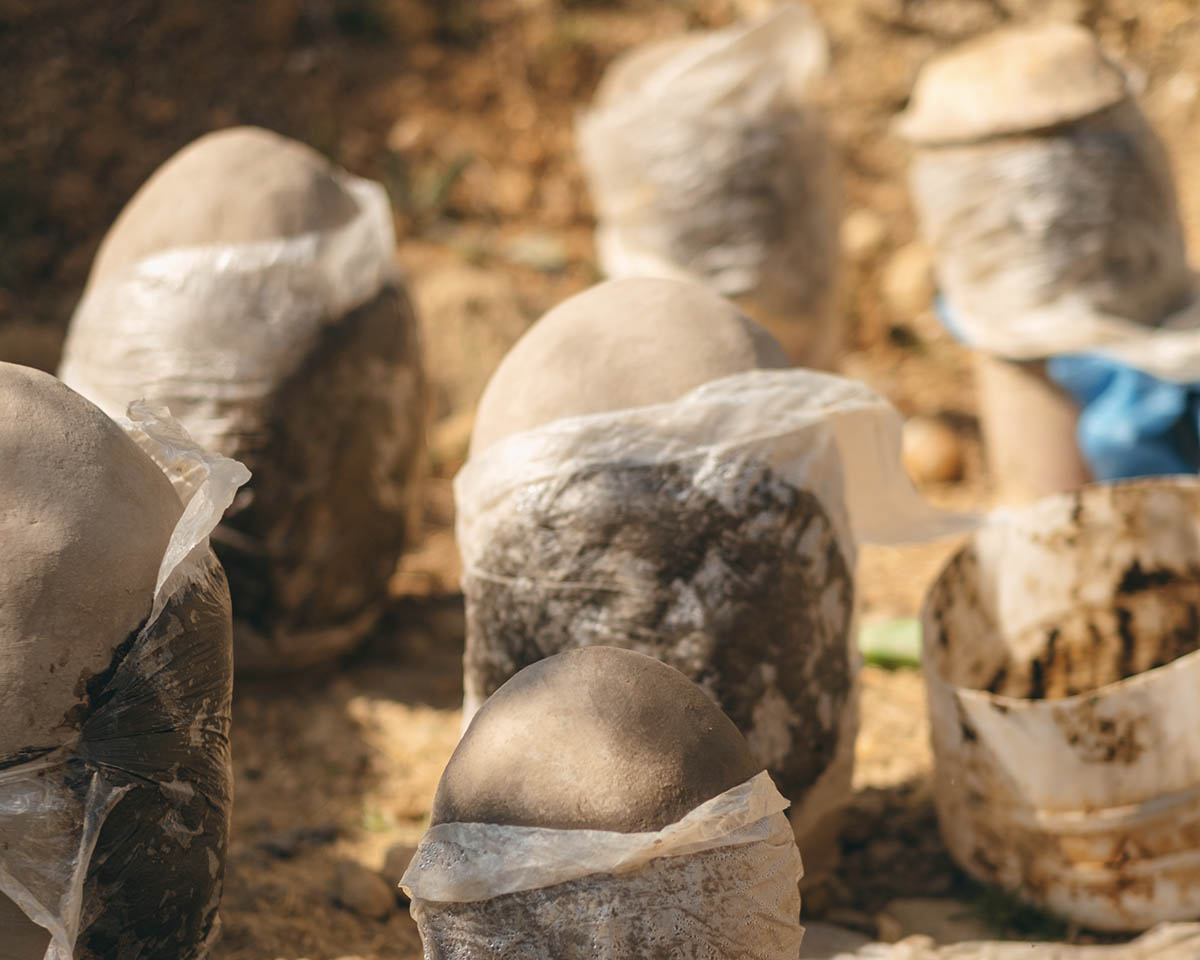 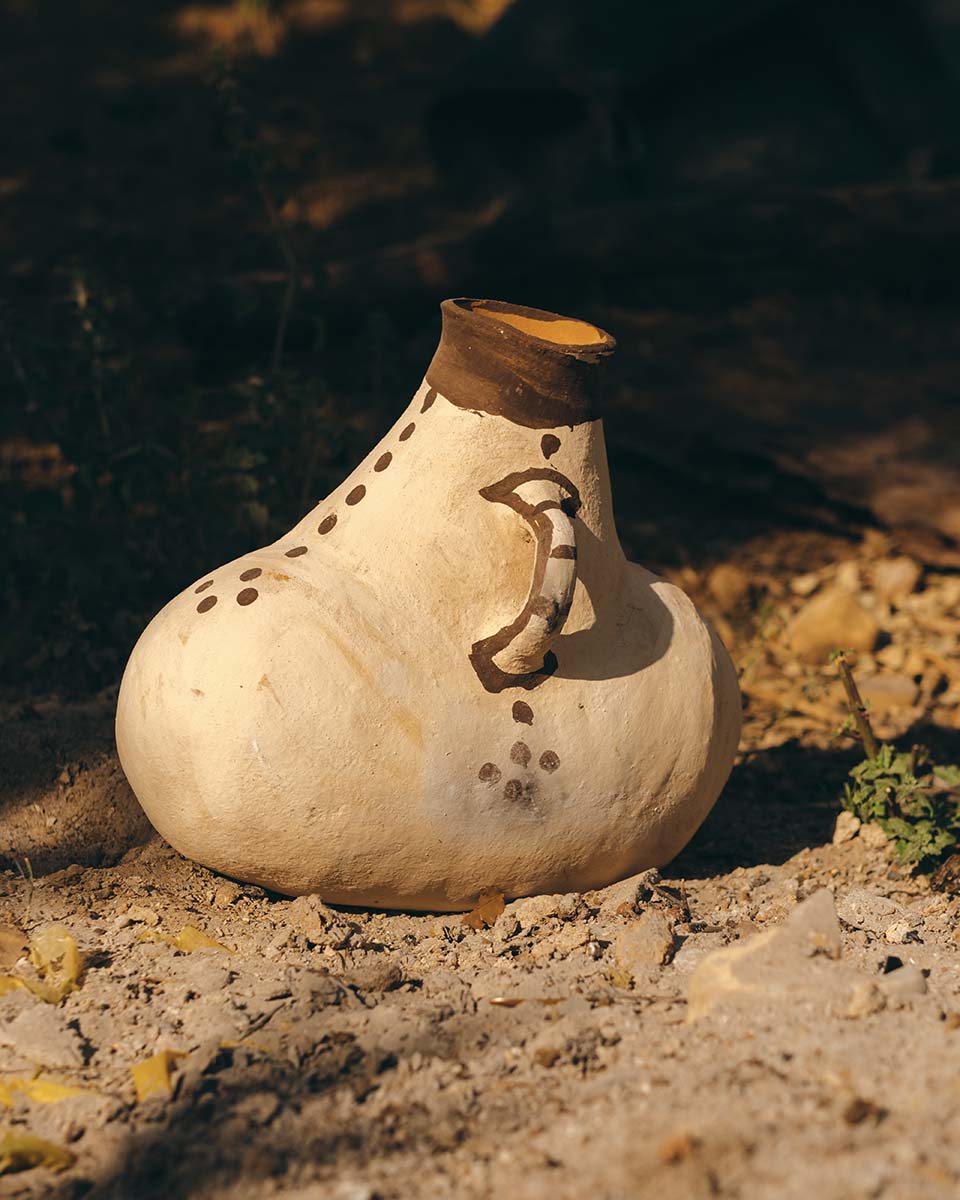 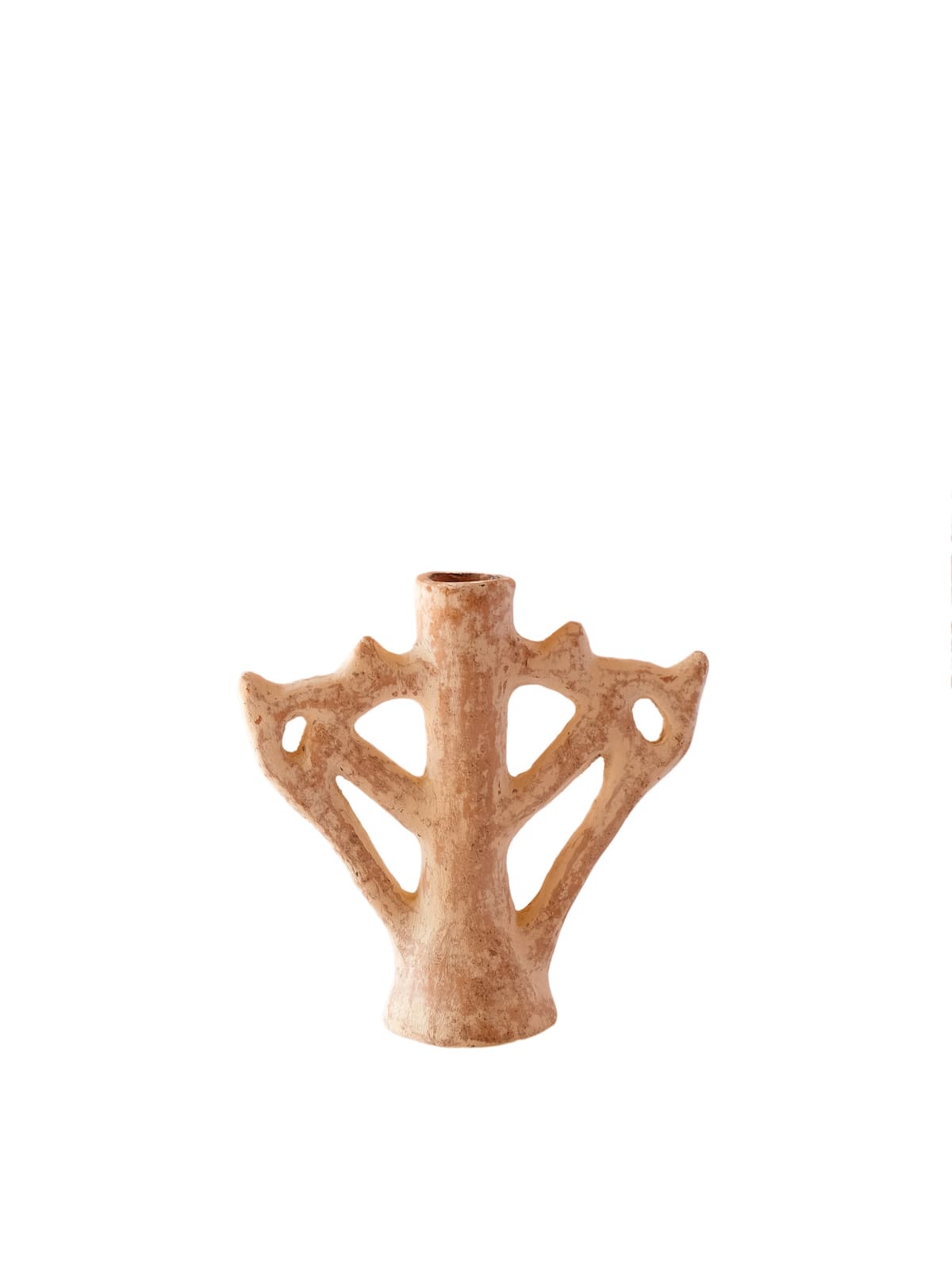 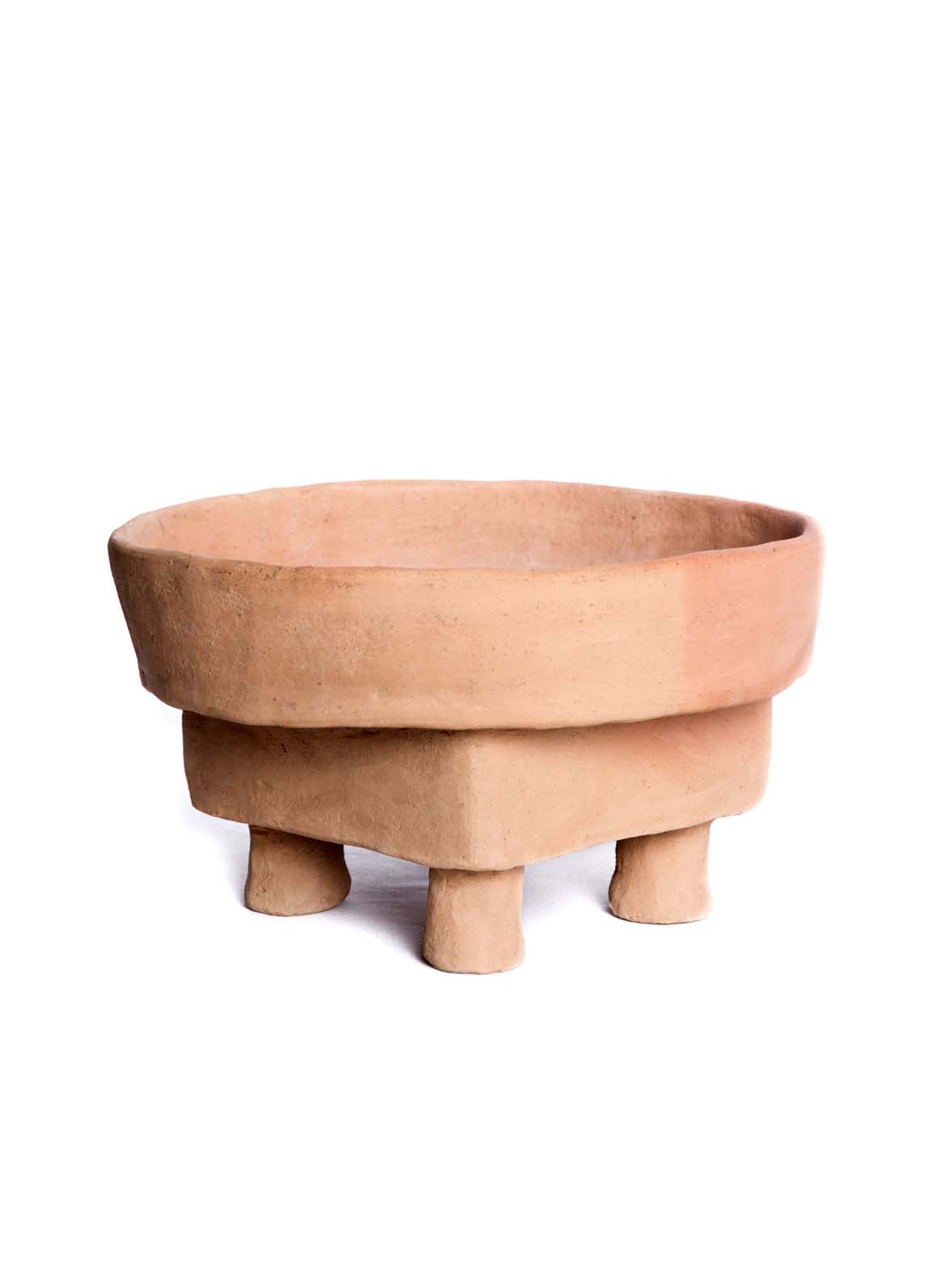 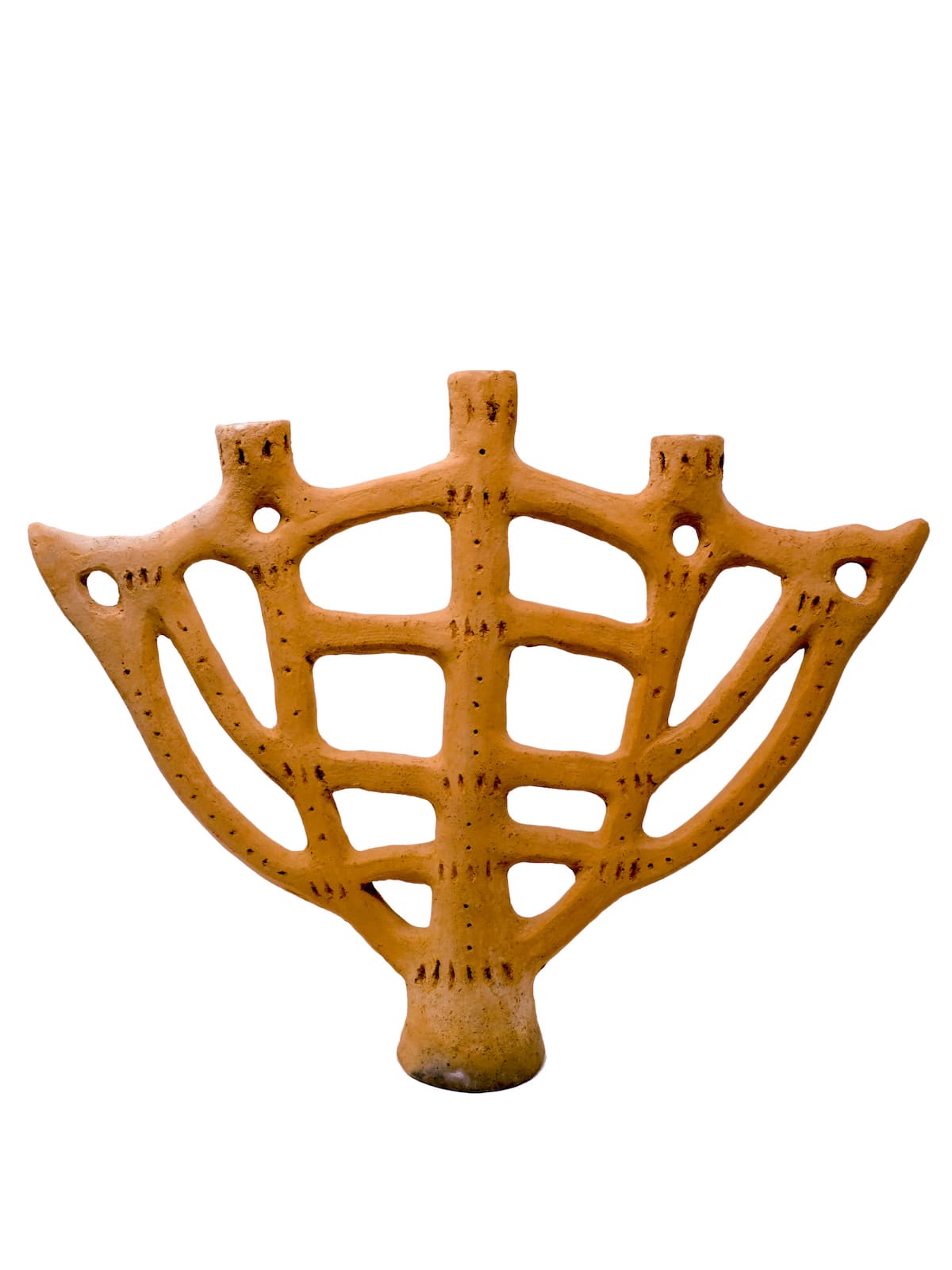 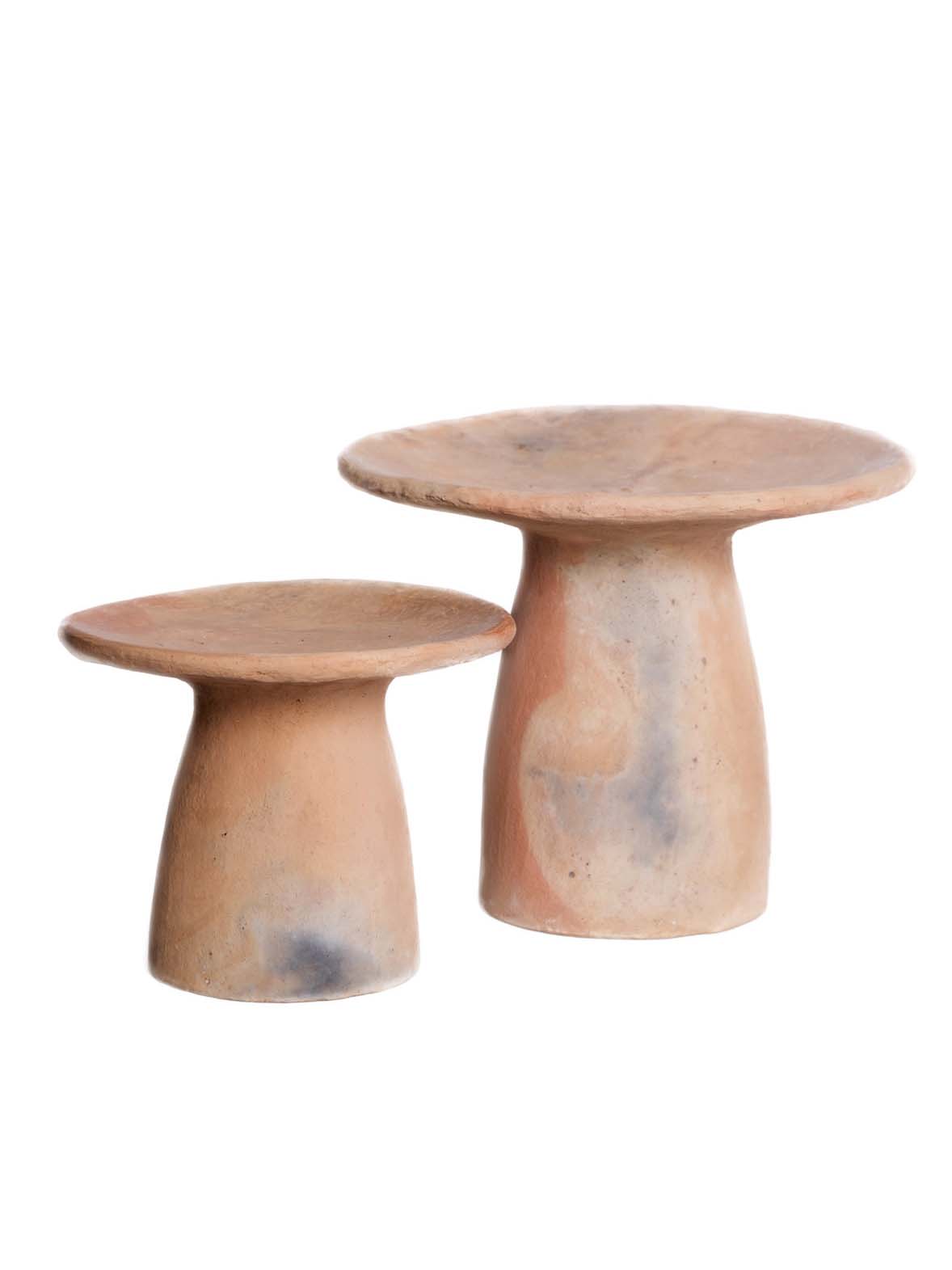 Get practical with our immersion