Indienne and piqué from the 17th – 19th centuries

In the 17th century, Marseille benefited from its strategic position as a free port. It was the choice port of call at a crossroads of maritime routes, and it quickly became the entry point of fabrics coming from the Levant. Thanks to its strategic position, it became an ‘open door to the Orient’ and Provence was the first to discover the sumptuous colourful fabrics that originated there, adapting them to make typically Provençal art. Consequently, Marseille became the cradle of Indienne and piqué fabrics well before the first half of the 18th century.

Originally, quilted garments were believed to have been adopted in the Holy Land by Crusaders who found them useful in protecting their bodies from their harsh and rigid armour. It was in the 17th century that this technique blossomed within Provençal art. Indienne-prints travelled by means of caravan routes through Persia and Turkey, then aboard the ships of audacious sea merchants. This facilitated the spread of the taste, trade, production and use of such prints.

From these rare and expensive painted canvases of India, whose indelible colours were applied to the canvas with a brush, the technique of block printing using engraved wooden moulds was developed and took off. In Aleppo, enormous quantities of chafarcanis canvases (typically small red and white motifs printed or sewn on to linen, used as lining for garments) were printed. These Indienne prints of the Levant took over Marseille and were met with enormous success. 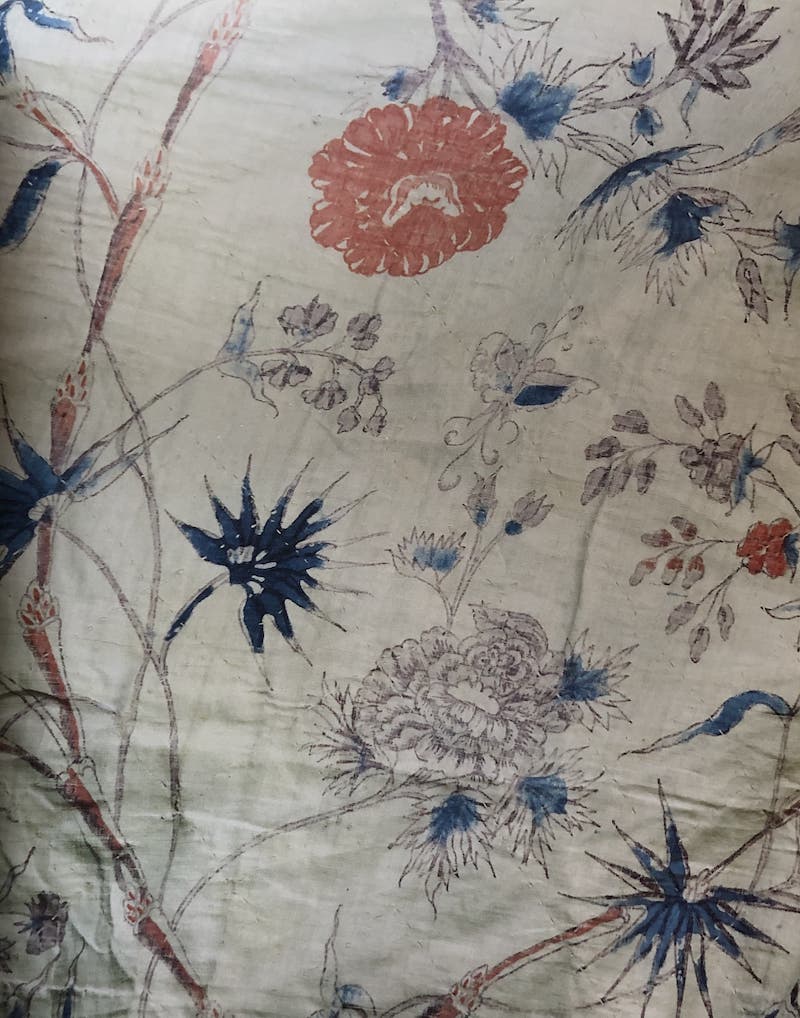 Handpainted canvas from India, circa 1750 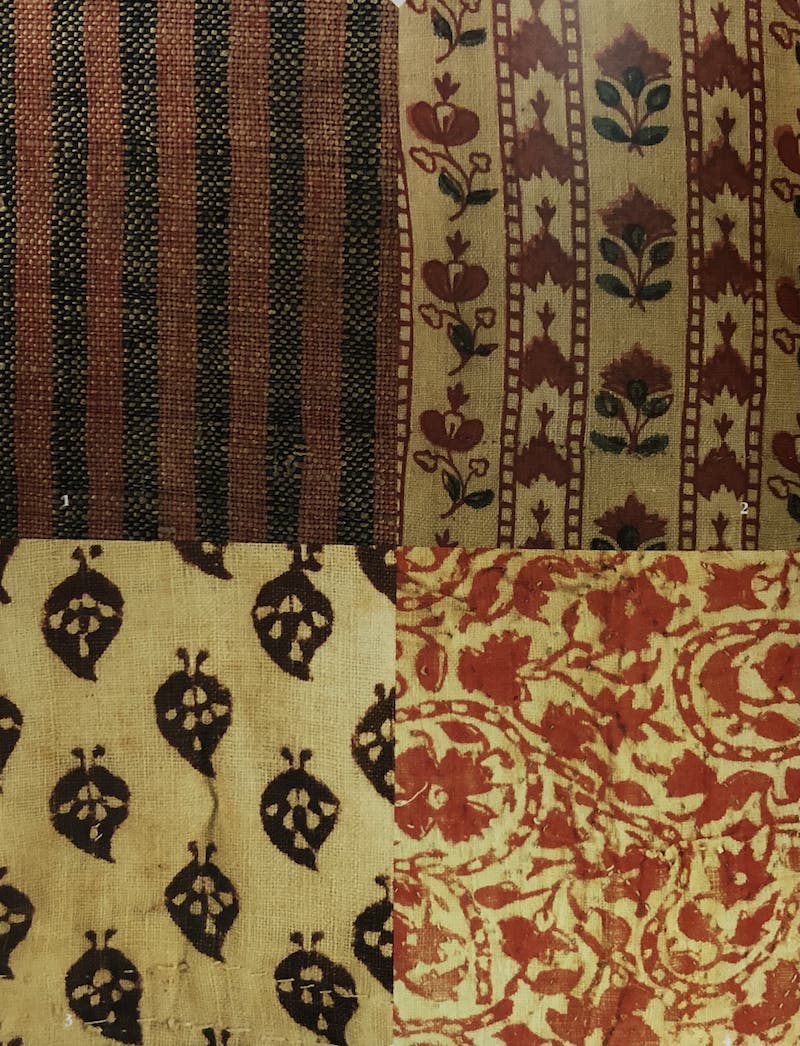 Canvases from the Levant, also called Chafarcanis, imported from Aleppo, circa 17th century

Marseille is the oldest centre of fabric printing in France, and was a pioneer at the time. This regional industry was born, thanks to the local artisanal playing card makers from Marseille, who used their craft and savoir-faire to fabricate moules (moulds) that developed this specialised textile printing. 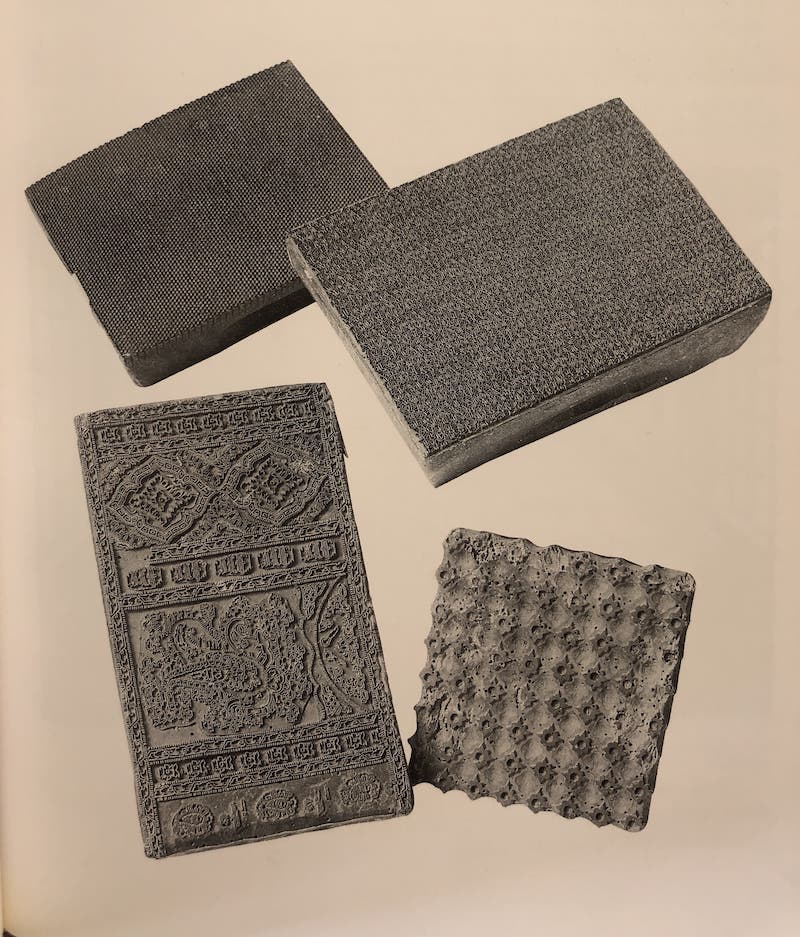 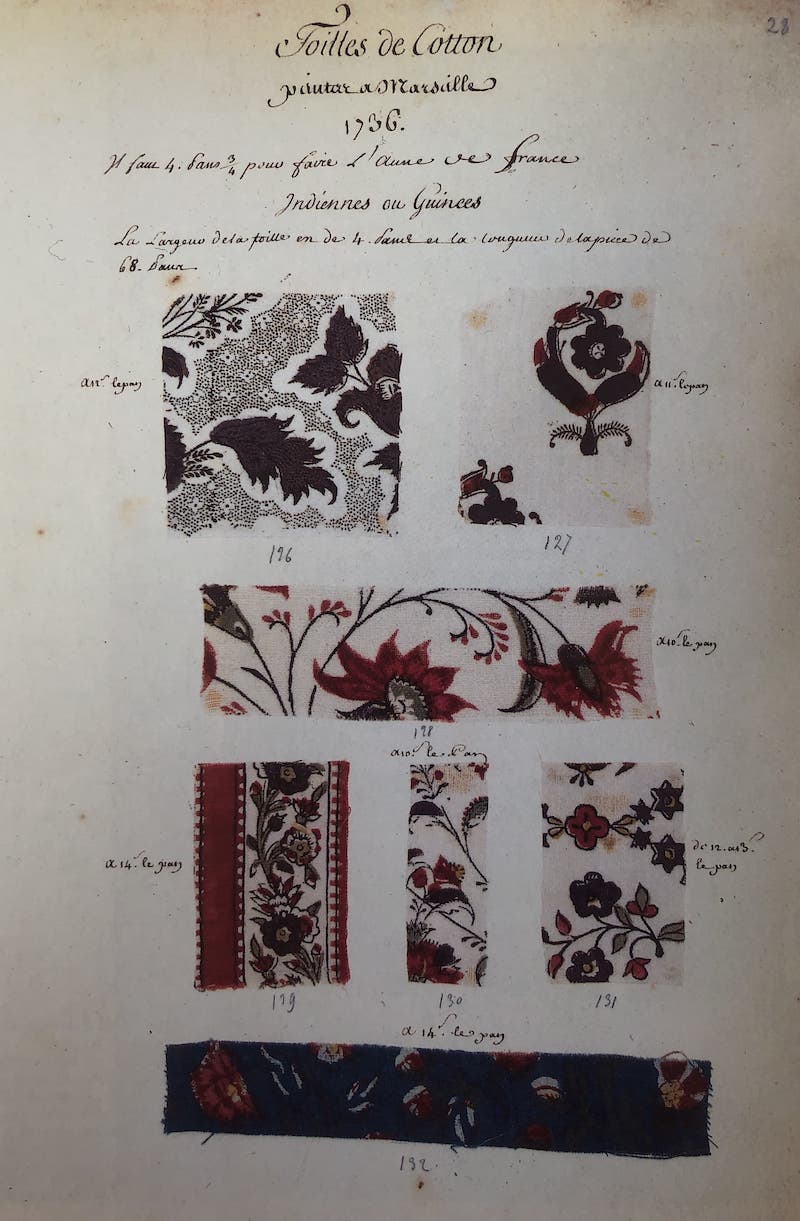 At this time, the bourgeoisie adored Indian handpainted fabrics from India and the Provençal people would adorn themselves in these styles from the Levant. These included Indienne prints, chafarcanis, as well as their locally crafted interpretations (initially for those who couldn’t afford the originals). Feeling the threat to local heritage, the traditional silk and wool industries protested against this drastic change in fashion trends. Consequently the government introduced prohibition in 1686, enforcing protectionist policies aimed at halting the trade and manufacture of these Indienne painted fabrics.

During this period of prohibition, the fabrics became so expensive when smuggled in as contraband that the women of Provence took it upon themselves to embroider delicate flowers with colourful threads of wool, using the point de Beauvais (a form of chain stitch done with a hook originating from India) onto local cloth. 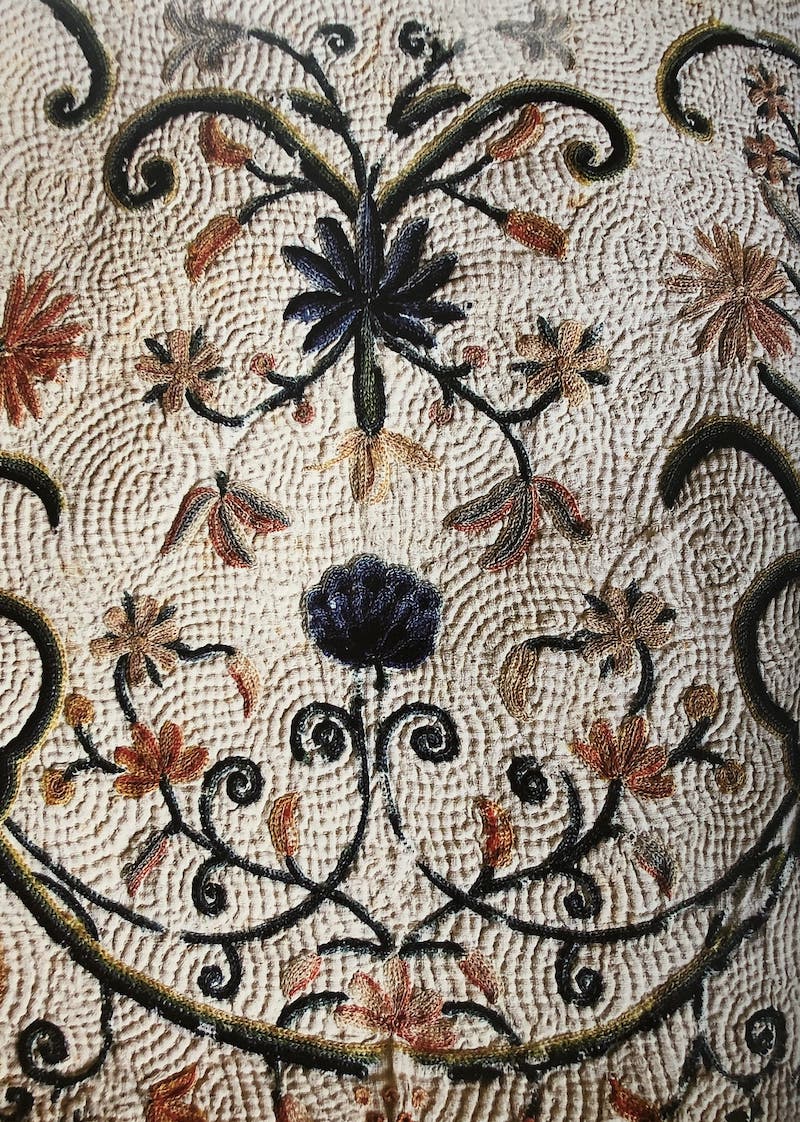 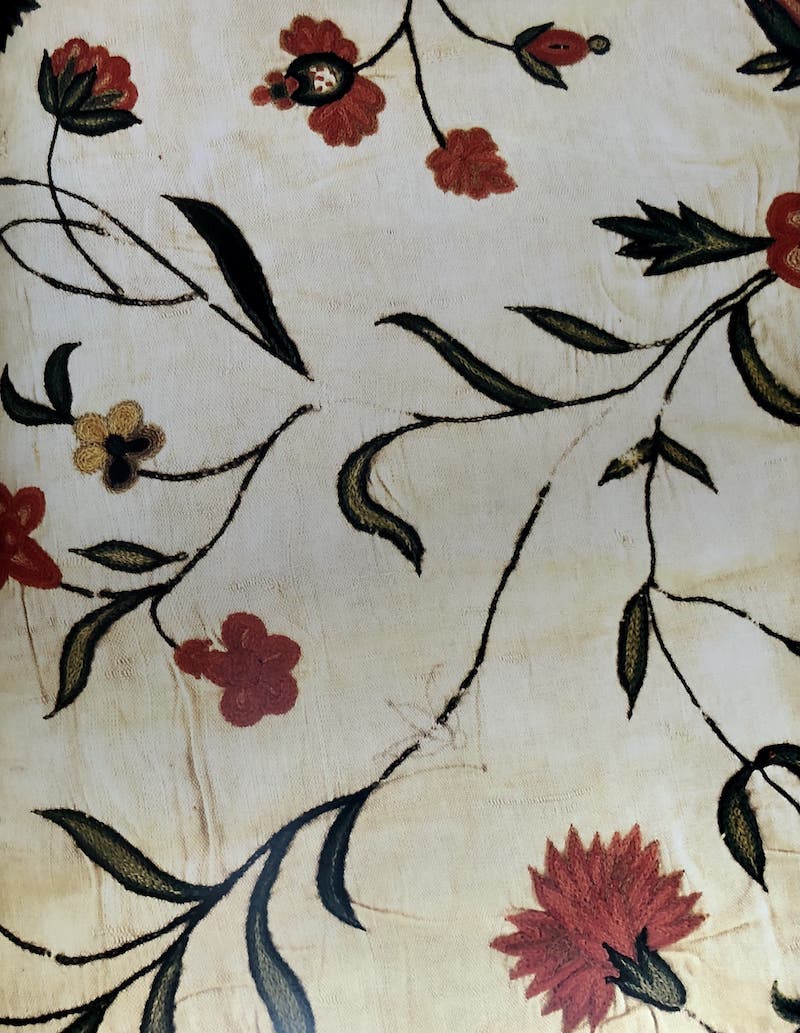 The ban was lifted in 1759 and shortly after, Marseille lost its monopoly over the fabrication of these Indienne prints.

Soon after in 1760, the textile-industrialist Christophe-Philippe Oberkampf moved to Jouy-en-Josas and created the famous Manufacture de Jouy. He became inspired by the Indienne printing that was already being manufactured in the Comtat Venaissin (now Vaucluse, Avignon – Isle-sur-la-Sorgue) named Toiles d’Orange de Jouy (Orange de Jouy fabrics). Merchants from Provence took advantage of Oberkampfs industrialisation of the indienne prints and began to source their fabrics from his factories instead. 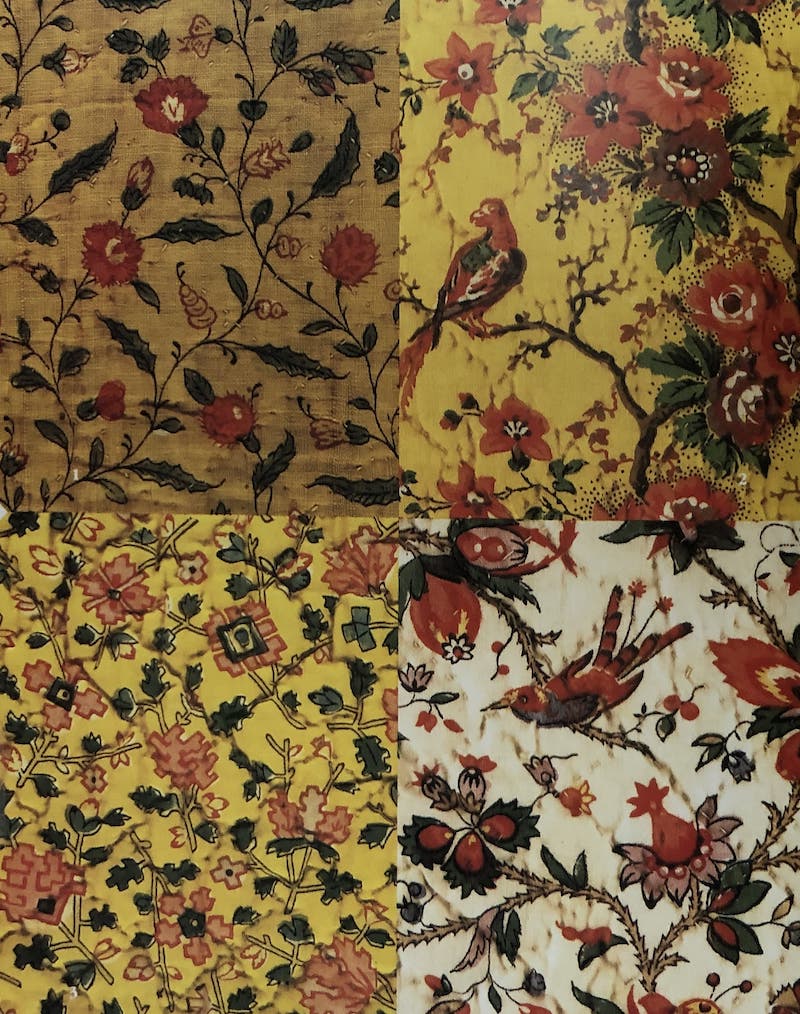 Samples of Indienne printed cottons illustrating the fashion for yellow backgrounds in Provence in the early years of the 19th century. Some of these cottons were certainly printed in Jouy. 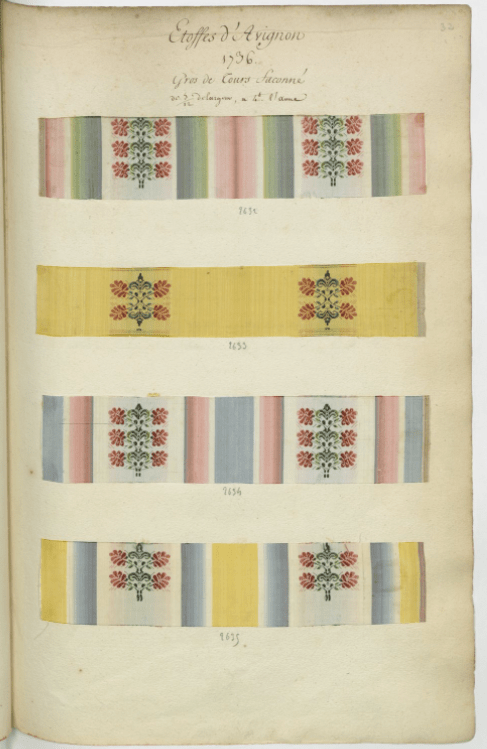 - Flowers, natural, inspired by Indian motifs, against a white backdrop that in Provence is called Indiano piso.;
- The bonnes herbes (good herbs), the sowing of wild flowers in a dense mixture of grassland, on a bronze backdrop;
- The ramoneurs (chimney sweeps), derived from bonnes herbes, on a darker backdrop;
- The bâtons rompus (broken sticks), where flowers are geometrically placed;
- The motifs mignonettes, appeared in the 19th century through the introduction of roller printing press that was invented in England; thus facilitating the reproduction of these small and endearing repetitive motifs. 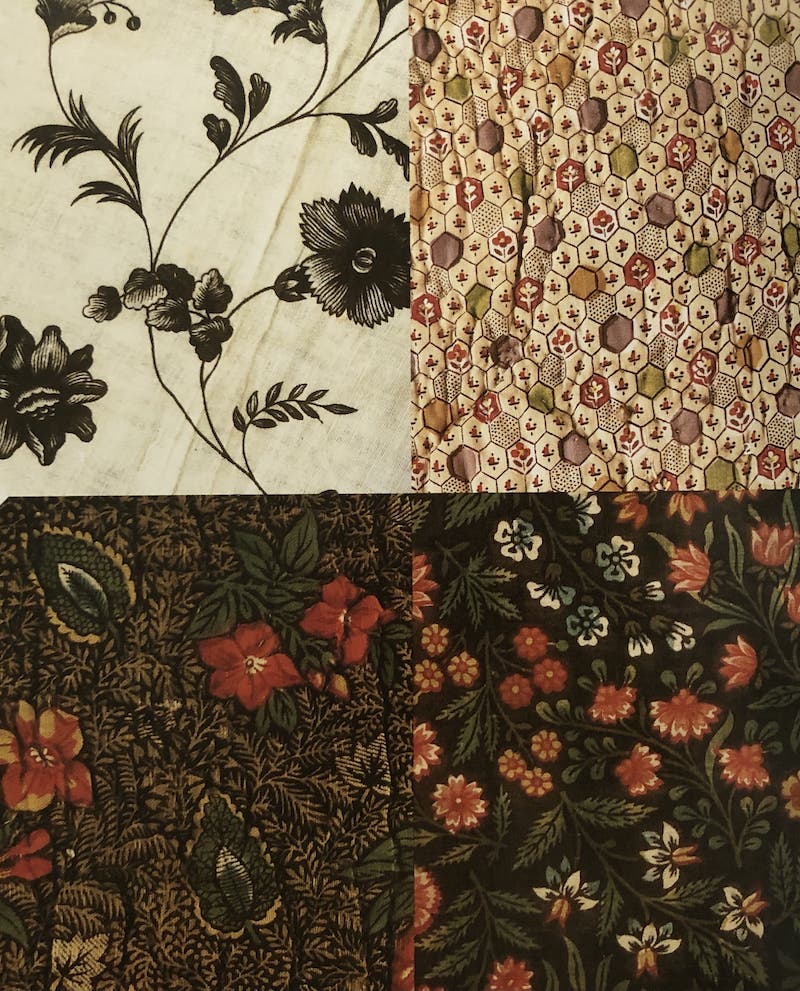 Piqué is a specialised form of quilting, the technique having been used since the 14th century. The implementation of piqué within the fabrication of quilted Indienne printed bedcovers was met with great success in the 18th and 19th centuries.

The underside of the worked fabric would be stretched over a large wooden frame loom. The fabric would be either a rough canvas, an Indienne-style printed lining (in the 18th century, the chafarcanis were often reserved for this very use), or a piece of cloth that had already been used and patched up, would be repurposed again. A layer of cotton wadding, and then a good quality piece of cloth would then be added to add depth to the fabric, creating a relief when stitched. Blue sanding was used to mark the pattern for the decorative stitching on the exterior fabric. A length of string would be coated in blue, stretched out from one end of the loom to the other, the cord would then be struck, like a plucked guitar string, so that the blue would vibrate off the piece of string, leaving sediment behind on the canvas. With one hand beneath the fabric and the other on top, the seamstress would quilt these layers together using a double-ended needle to sew a front stitch. This technique was used to create quilted bedcovers.

When we talk about courte pointe (counterpane, an archaic term for bedcover in Old English, stemming from the aforementioned term in Old French.), we talk about the fold of the bedcover, at the foot of the bed. Quilted bedding is all done with a front stitch. 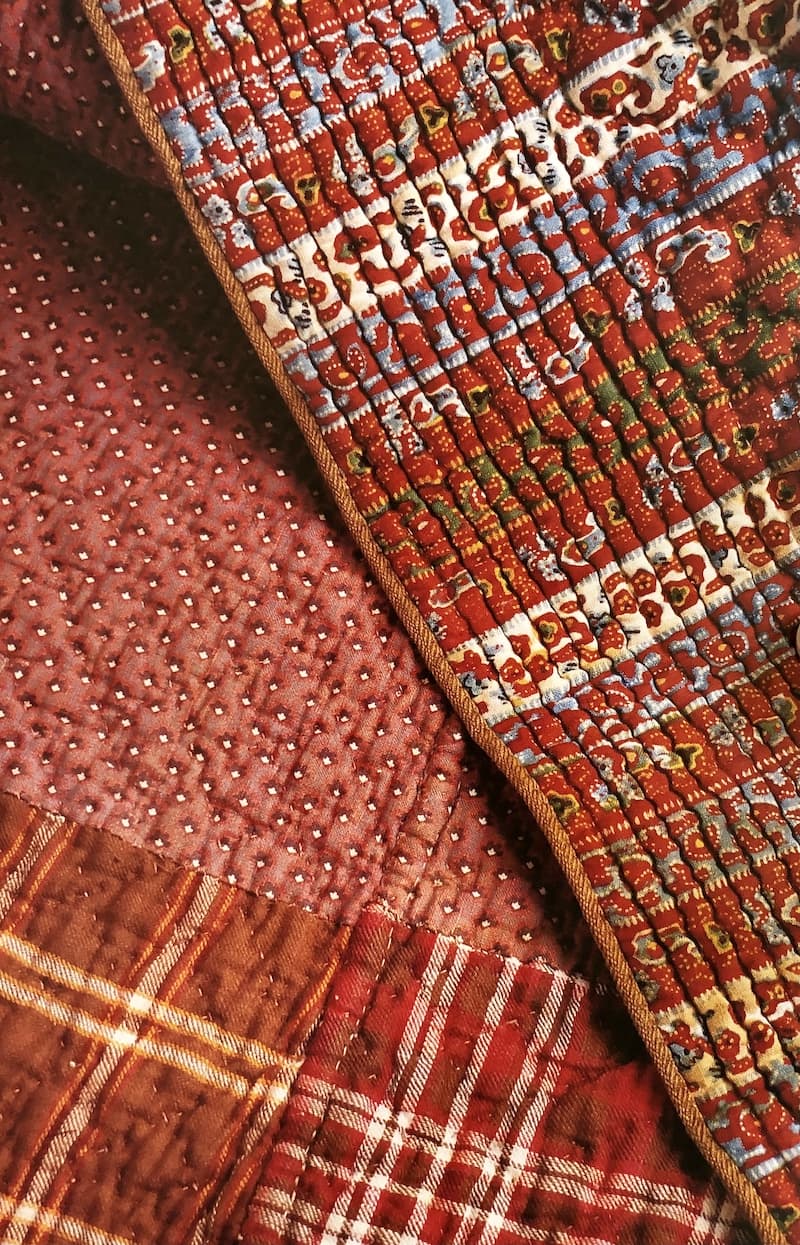 This very refined style of needlework and stuffing is unique to Marseille and differs from the piqué stitch due to its richness and enormous variety of motifs. A decorative pattern is formed when two quilts are stitched together. Wadding is then stuffed between the stitching to create an embossed relief. This type of quilting work is so refined that it often resembles embroidery.

The fabric’s lining would also be stretched across the loom with the external side of the fabric simply being held down. The greatest care would be taken in transferring these meticulous decorations by means of a poncis perforé (‘prick and pounce’, a method that seeks to transfer an embroidery design by pricking a pattern that’s placed over the fabric, and using a stamp called a ‘pounce’ that’s covered in powder that then filters through the tiny perforated gaps, leaving tiny dots on the fabric in question). Then, in the same way as with the piqué technique, the front stitch would be used to finely stitch the design whilst the backstitch would be used for the most refined areas.

This is how the relief could have been given where the seamstress deemed it necessary. The name boutis was given to the needle used to do this – the technique of threading between fine strands of cotton stitching. 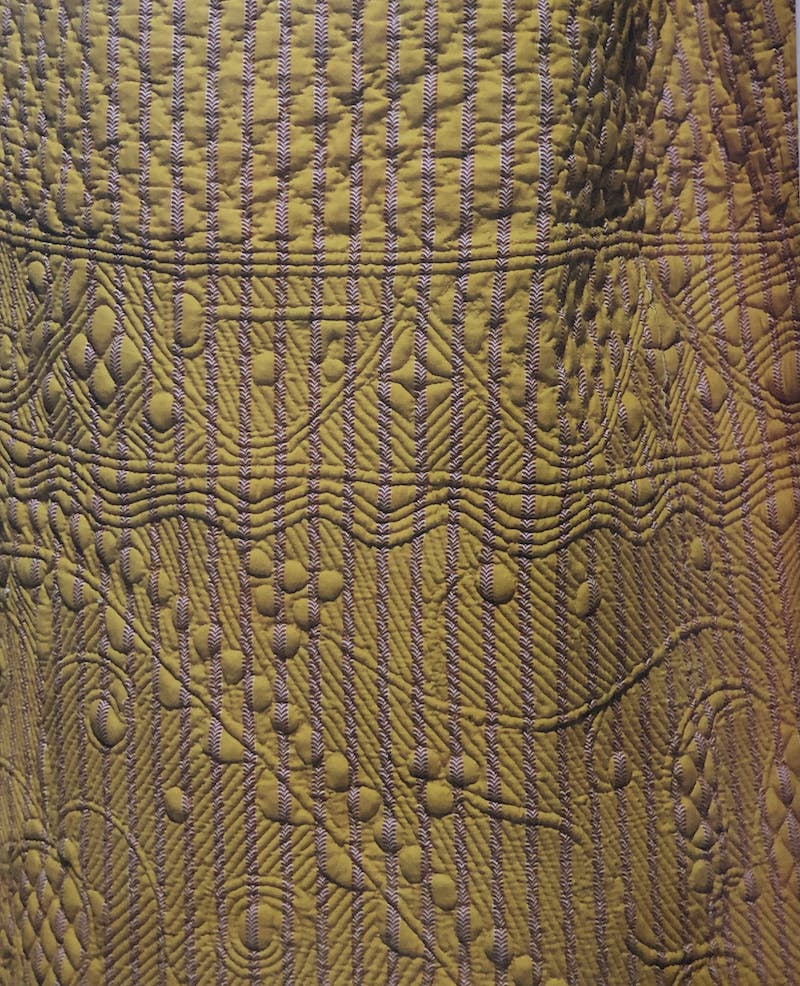 Cotihoun pica embroidered using boutis technique, the boutis embroidery is finely executed on a naive decoration undoubtedly drawn by the seamstress herself, a key appears on the drawing; Arles, beginning of the 20th century.

Plants and colours used in Provence

Colours that were used in block printing during the 17th century would have a separate block for each individual colour.

At Mont Ventoux in Provence, the Smoke-tree (Rhus Cotinus) or yellow seeds from Avignon were gathered to produce the yellow for block printing. The yellow weed called herbe à jaunir (Dyer’s greenweed, Genista tinctoria) was also used to colour fabric by weaving in the fibrous yellow stems.

Blue dyes made from Woad (Isatis tinctoria) have been used since the Middle Ages, whilst indigo has been shipped from the Orient, arriving in the port of Marseille as far back as the 13th century.

Red dye was finally obtained from the Madder plant (Rubia tinctorum), whose cultivation was introduced in Comtat Venaissin (now Avignon) in the 18th century. The appearance of these synthesised colours date back to the mid-19th century. 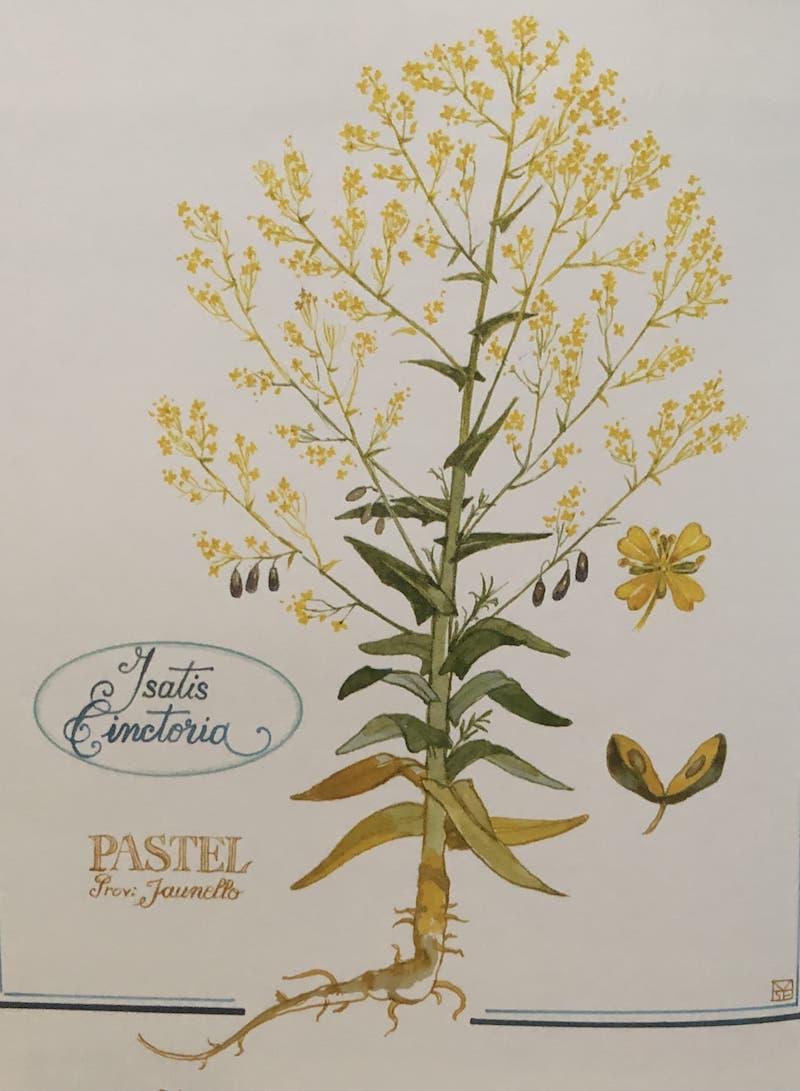 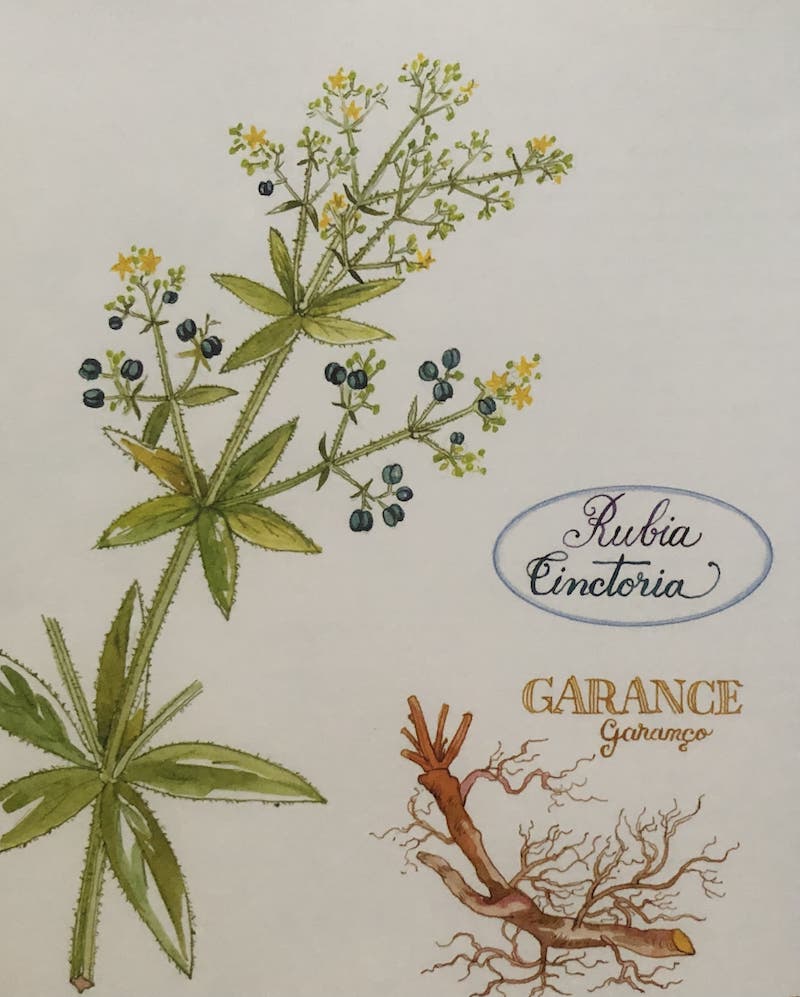 Since the end of the 17th century, Provençal clothing traditions were established with the adoption of new local sewing and quilting techniques, as well as printed cotton fabrics with repetitive coloured motifs. Having traded their woollen rags for airy colourful cotton clothing, this era saw a radical shift in the lifestyle and fashion of the Provence people.

Such stitching and quilting was characteristic of traditional Provençal clothing until the end of the 19th century, quilted petticoats in particular were its hallmark. The Provençal bodice, the caraco, is most commonly made with Indienne-style motifs. The recycling and repurposing of these textiles can be observed in the most covert parts of these garments throughout the ages. 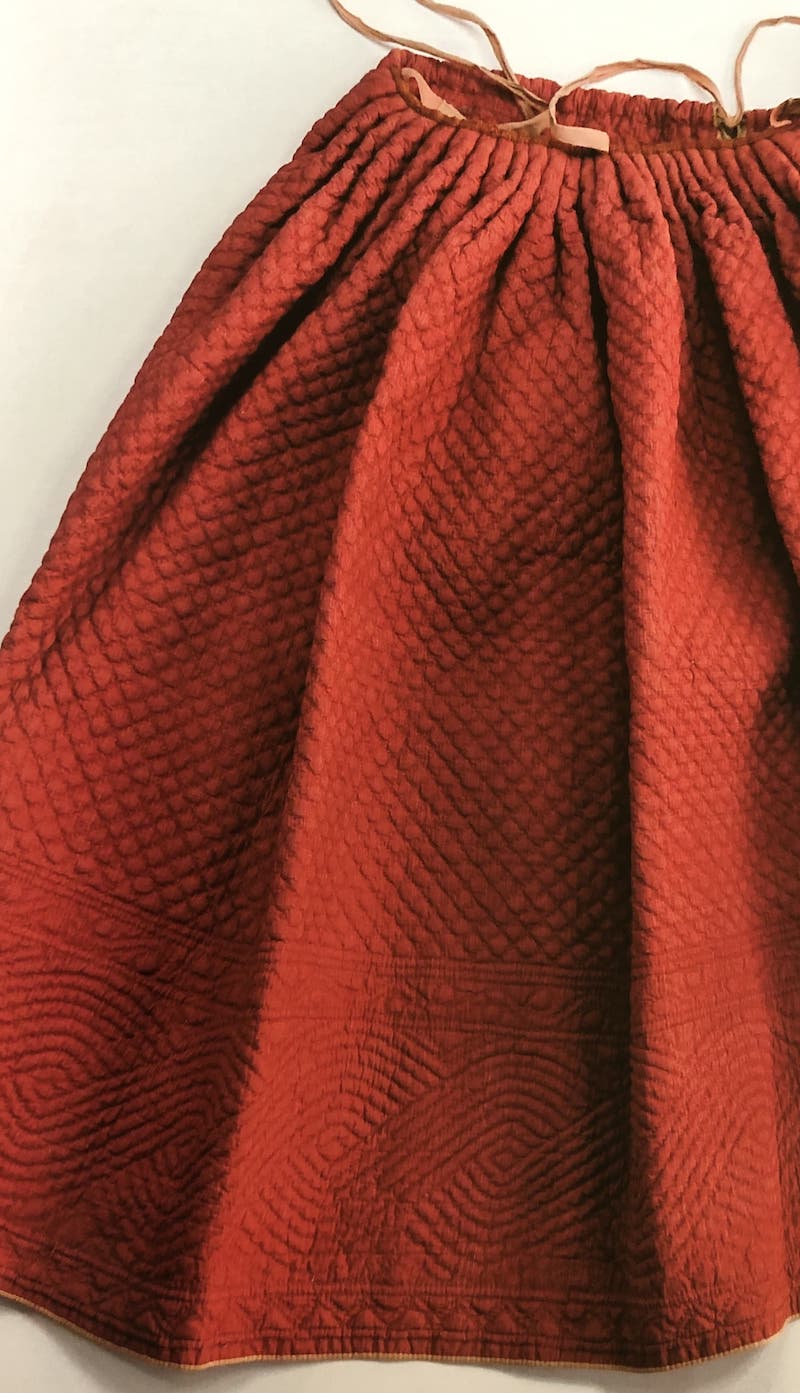 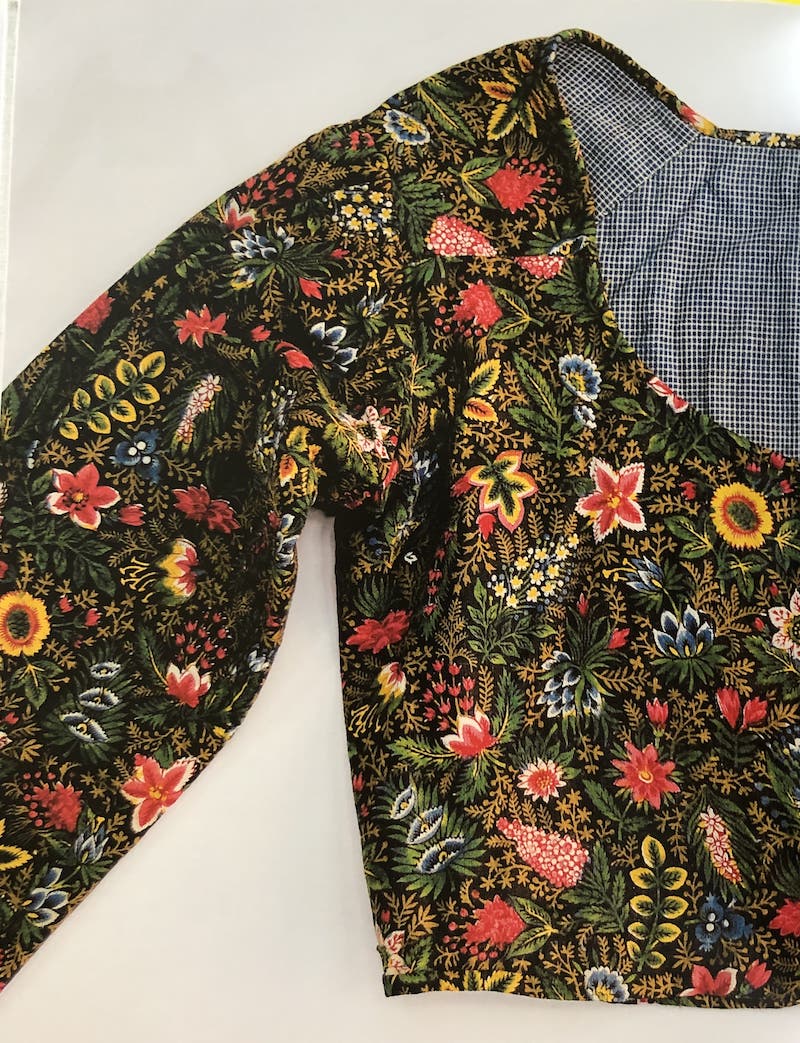 This is how these Indienne printed textiles became known throughout the world as Provençal printed fabrics. We must not however, forget their origins. The Provençal people are passionate when it comes to these fabrics from the Orient, and they have transformed them into a craft of their own. These prints can be seen in all Provençal garments, expressing the true originality of the Provençal wardrobe. 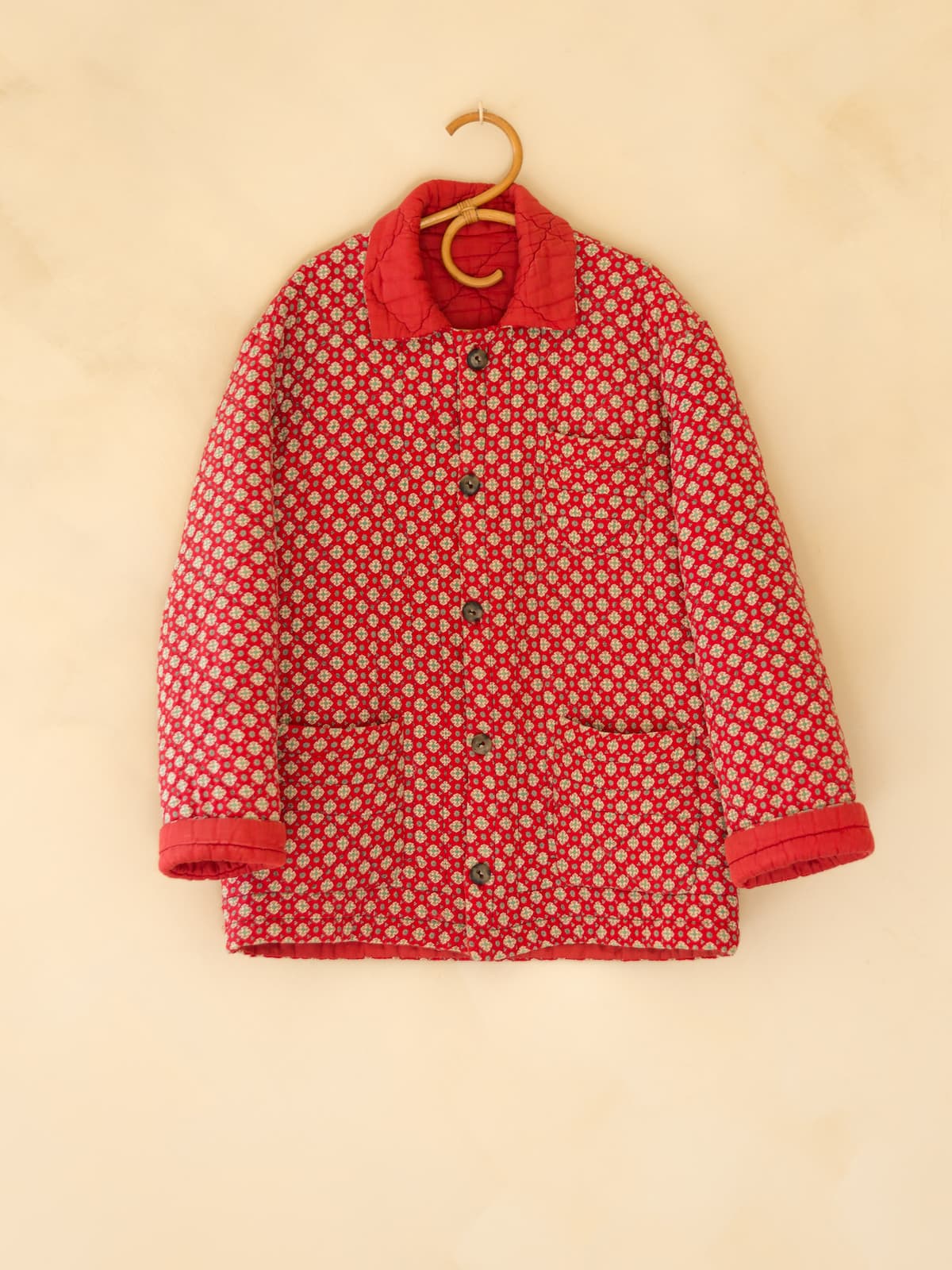 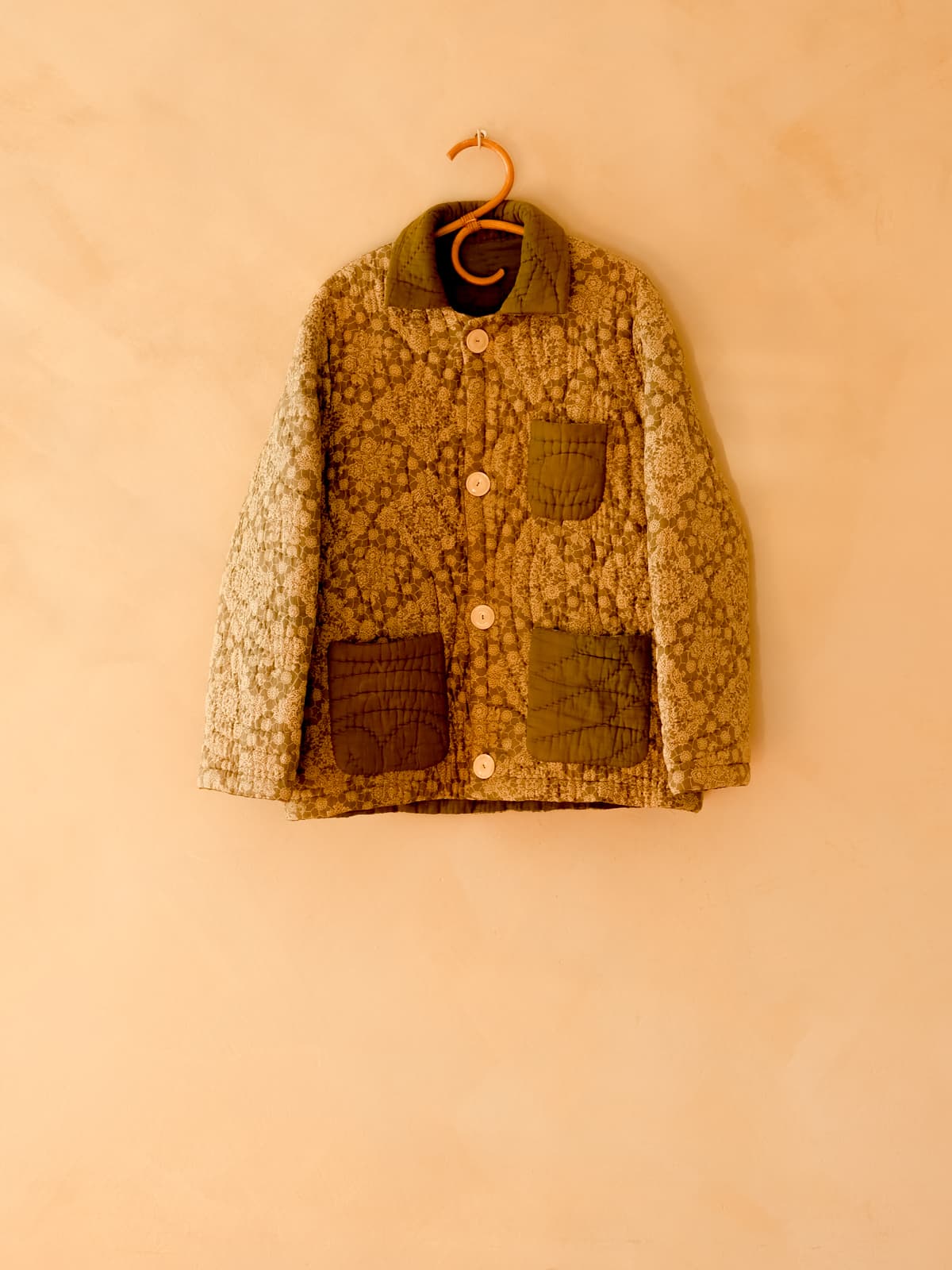 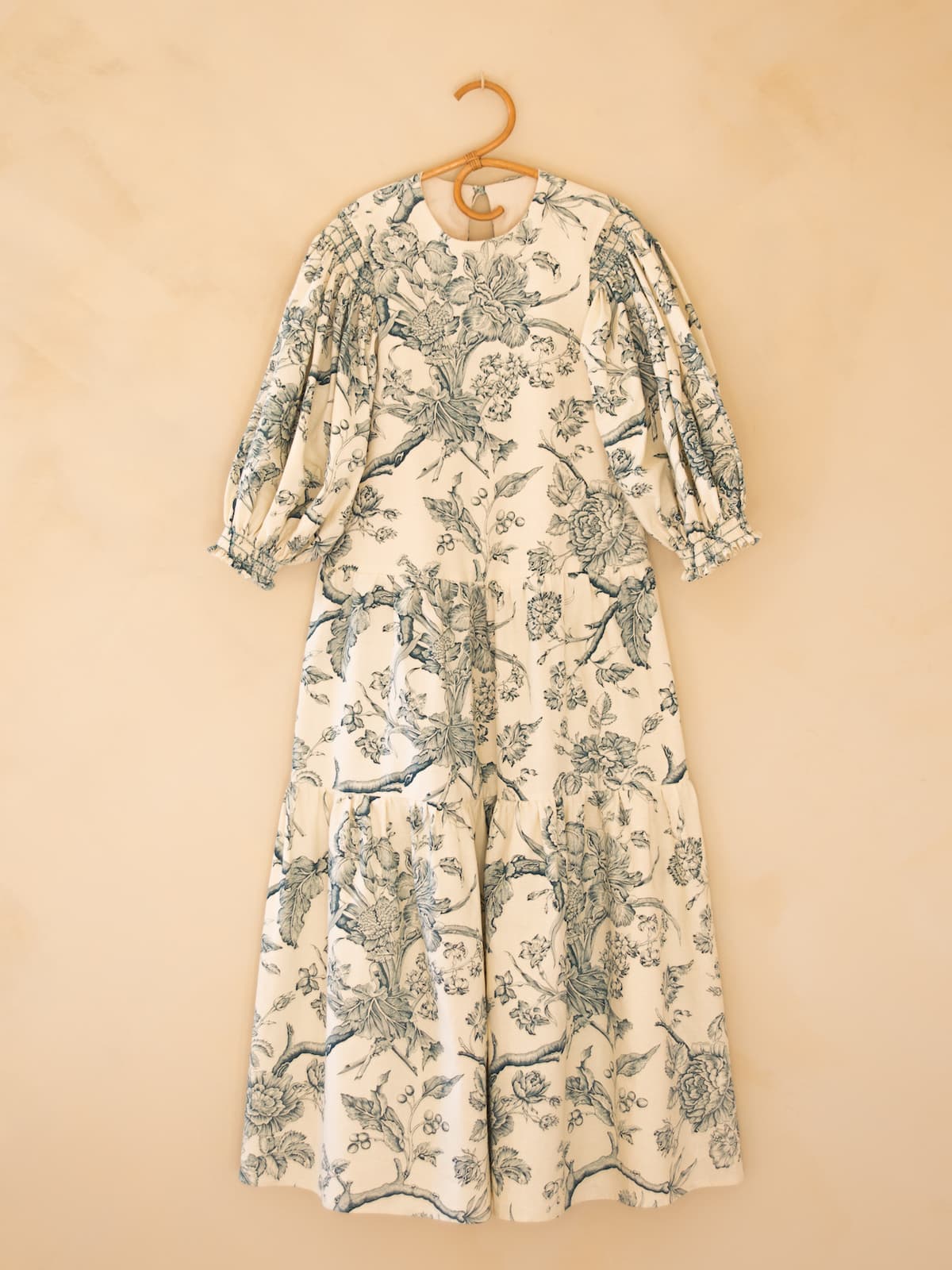 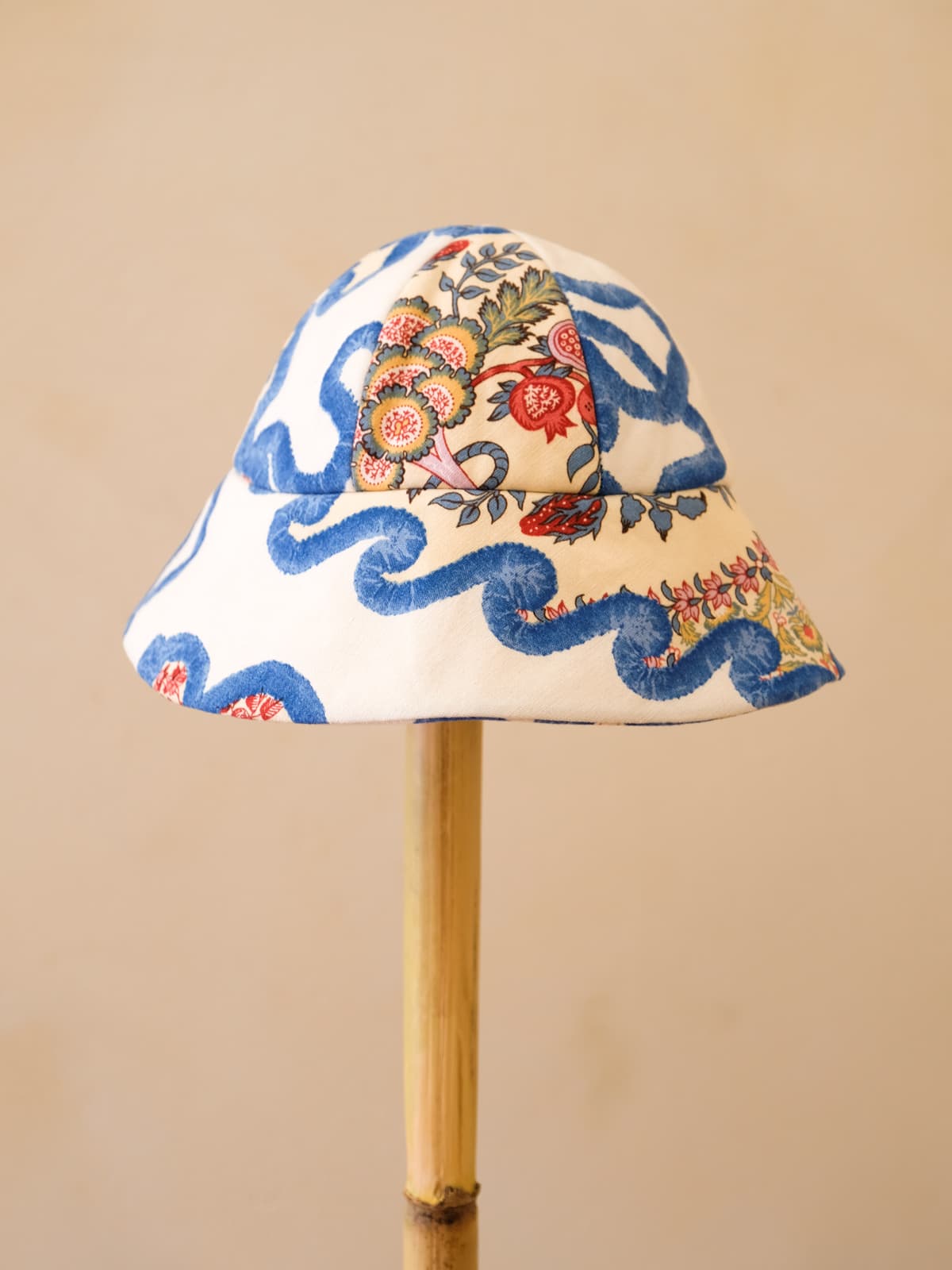